EU guilty of own walls as it slams Trump's immigration policy 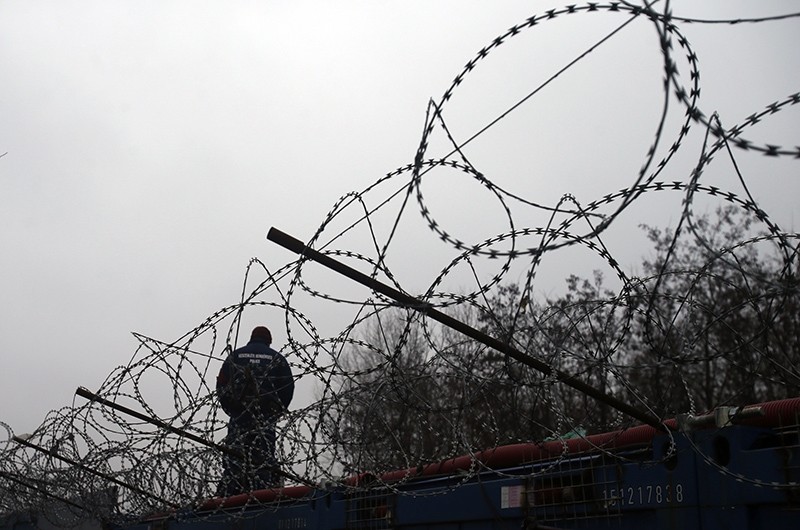 A Hungarian police officer stands guard at Serbia's border with Hungary near a makeshift camp for migrants in Horgos, Serbia, Wednesday, Feb. 8, 2017 (AP Photo)
by Anadolu Agency Feb 15, 2017 12:00 am

While the European Union heaps mounting criticism on U.S. President Donald Trump's immigration policy, at least eight European countries have built different types of walls over the last few years in a bid to keep refugees out of their borders.

European leaders have been vocal in their denunciation of Trump's plan to build a wall on the southern border with Mexico, and to ban entry to nationals of seven Muslim-majority countries.

Federica Mogherini, the High Representative of the European Union for Foreign Affairs, harshly criticized both plans on Feb. 3, cautioning against "those who wish to build walls rather than bridges.

"In Europe, we have a history that has told that every time one invests in divisions and walls you might end up being in a prison if you build all walls around you. We have a history and a tradition that we celebrate when walls are brought down and bridges are built," she said.

However, seven EU member countries -- Spain, Hungary, Bulgaria, Greece, France, Austria, Slovenia -- and one non-EU member country, Macedonia, have walls or fences to block Syrian refugees and people of other war-torn nations, while another EU member, Estonia, has one in the pipeline.

There are two such fences in Spain, three in Hungary, and one each in Bulgaria, Greece, France, Austria, Slovenia, and Macedonia.

Spain's walls are located on its Morocco border -- Melilla and Ceuta border fences designed to stop migrants from Africa, especially the northern regions.

Meanwhile, the Greek government erected a razor-wire fence in 2012 along the Greece-Turkey border to block refugees.

Hungary completed construction of three razor-wire fences in 2016 along its border with Croatia and Serbia. They cover a total of 109 kilometers.

Last year, Austria also put stricter controls into effect along its border with Hungary, constructing a fence near the Slovenian border, completed in Jan. 2016.

Slovenia built its fence alongside its border with Croatia in November 2015.

France too constructed a wall in the French port city of Calais in 2016 to prevent migrants, with contributions from the U.K.

Non-EU member Macedonia built a fence on Greek border to control refugees in 2015.

Meanwhile, Estonia is planning the construction of a razor wire fence on its border with Russia stretching up to 135 km (83.8 mi), estimated to finish in 2019.