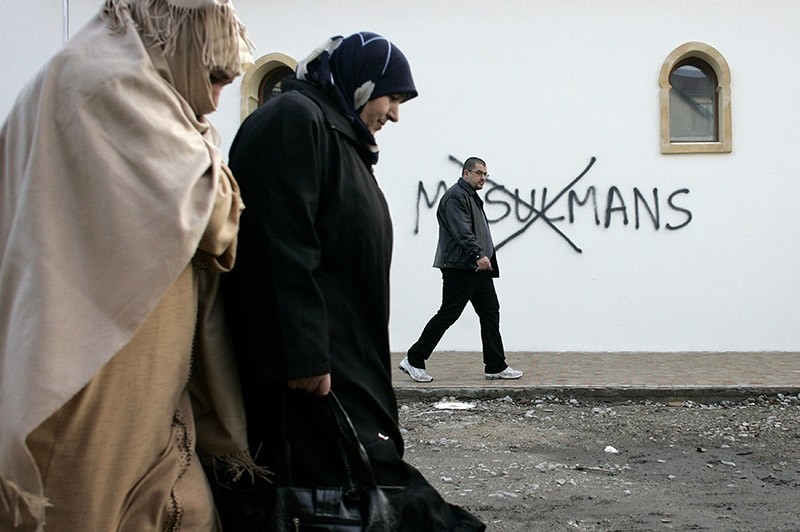 Muslim residents walk past racial slurs painted on the walls of a mosque in the town of Saint-Etienne, central France. (AP File Photo)
by Daily Sabah Feb 16, 2017 12:00 am

The owner of a restaurant in the French district of Tremblay-en-France, located northeast of Paris, faces a prison sentence of up to five-years and a fine of 75,000 euros ($79,500) for insulting and refusing to serve two Muslim women wearing hijab.

The incident occurred on August 27, 2016, when 55-year-old Jean-Baptiste Debreux, the owner of Cénacle restaurant, refused to serve two veiled Muslim women and asked them to leave his restaurant, while also insulting Muslims, French daily Le Figaro reported on Thursday.

When the event surfaced in the French media, it caused a good deal of commotion in society, which is known for its anti-Muslim, sometimes state-led propaganda and Islamophobic policies. For example, there has been a recent discussion about banning women from French beaches should their clothing be too conservative.

The restaurateur's discriminatory remarks were made public when one of the women involved in the event, named Myriam, secretly recorded his hateful speech with her smartphone.

''Racists do not drop bombs and do not kill people. Racists like me,'' Debreux told veiled Muslim clients.

''Madam, all terrorists are Muslim and all Muslims are terrorist,'' the restaurant owner added, before asking the young Muslim women to leave his restaurant.

The two victims told the man that they had not been aware of his views, noting that if had they known, they never would have entered his restaurant.

Debreux is set to be tried on Thursday by a French court in Bobigny for ''discrimination on the grounds of religious affiliation in a place open to the public.''

The Collective Against Islamophobia in France (CCIF) denounced the racist act, as well as the indifference of the other clients who were in the restaurant when Debreux was spewing his hate speech.

The restaurateur defended himself, saying that he was nervous and became angry because he had lost a friend in a Daesh attack, French daily 20 minutes reported on Thursday, citing Debreux's interview with local media outlets.