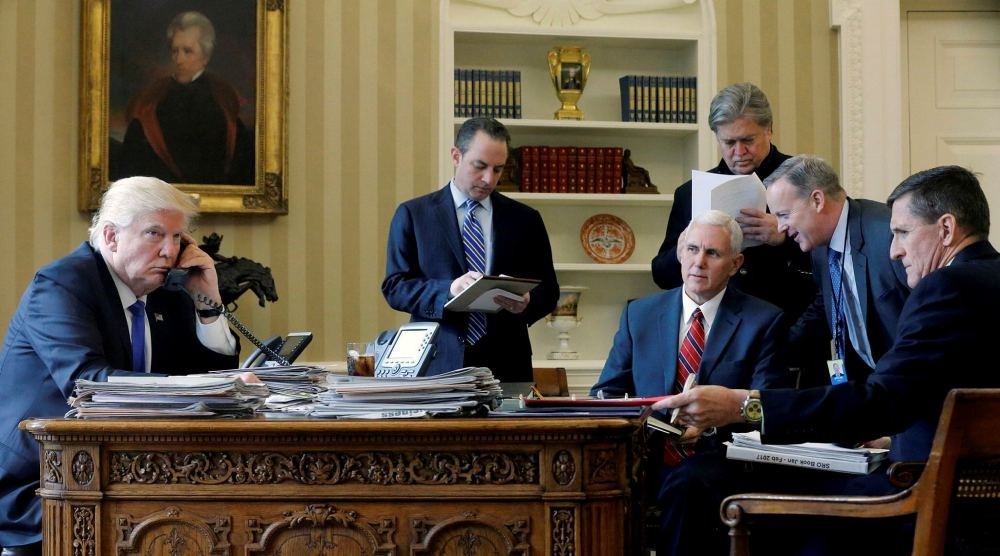 Trump joined by (from left to right) Chief of Staff Priebus, VP Pence, senior advisor Bannon, Communications Director Spicer and National Security Advisor Flynn, speaks by phone with Russia's Putin in the Oval Office at the White House
by Compiled from Wire Services Feb 16, 2017 12:00 am

Amid U.S. President Trump's repeated promises to improve relations with Russia, the Russian foreign ministry rejected discussions over giving the annexed Crimea back to Ukraine, furthering tension over the Ukraine crisis

Russia said it would not hand back Crimea to Ukraine or discuss the matter with foreign partners after the White House said U.S. President Donald Trump expected the annexed Black Sea peninsula to be returned.

"We don't give back our own territory. Crimea is territory belonging to the Russian Federation," Maria Zakharova, spokeswoman for the Russian Foreign Ministry, told a news briefing yesterday.

Ukraine said the referendum was a sham held at gunpoint after Russian troops illegally annexed the peninsula, that Russia-friendly president Viktor Yanukovych was ousted by people power, and that Moscow should return Crimea. The 2014 annexation prompted the United States and the European Union to impose sanctions on Russia, plunging Western relations with the Kremlin to their worst level since the Cold War.

White House spokesman Sean Spicer said on Tuesday that Trump expected and wanted to get along with Russia, but was expecting Moscow to hand Crimea back.

"Crimea was TAKEN by Russia during the Obama Administration. Was Obama too soft on Russia?" President Trump tweeted, reiterating his position on Crimea. Trump has repeatedly praised Putin and signaled that U.S.-Russia relations could be in for a makeover under his leadership. However, there has still been confusion over how Trump plans to manage his relations with Moscow.

Kremlin spokesman Dmitry Peskov, when asked about Spicer's comments, said President Vladimir Putin had already explained why Crimeans had turned to Russia. "The theme of returning Crimea will not be discussed ... Russia does not discuss its territorial integrity with foreign partners," Peskov told a conference call with reporters.

Trump had not raised the Crimean issue in a Jan. 28 phone call with Putin, Peskov noted, saying the Kremlin would try to make contacts with the Trump administration to try to improve ties which he said were in "a lamentable state."

Vyacheslav Volodin, speaker of the State Duma, the lower house of parliament, told MPs any talk of Crimea's status amounted to a challenge to Russia's territorial integrity.

Volodin, a close Putin ally, told the Interfax news agency Trump had promised in his election campaign to work to improve relations with Russia. "Let's wait for some first-hand words from the U.S. president," said Volodin. "When people get elected by voters it's not merely for warm words and the ability to speak, but for concrete promises ... that will be fulfilled."

At least 33 people including civilians have been killed and several dozen injured in fighting this week in eastern Ukraine between government forces and Russia-backed separatist rebels — the worst violence in the region since 2015.
RELATED TOPICS