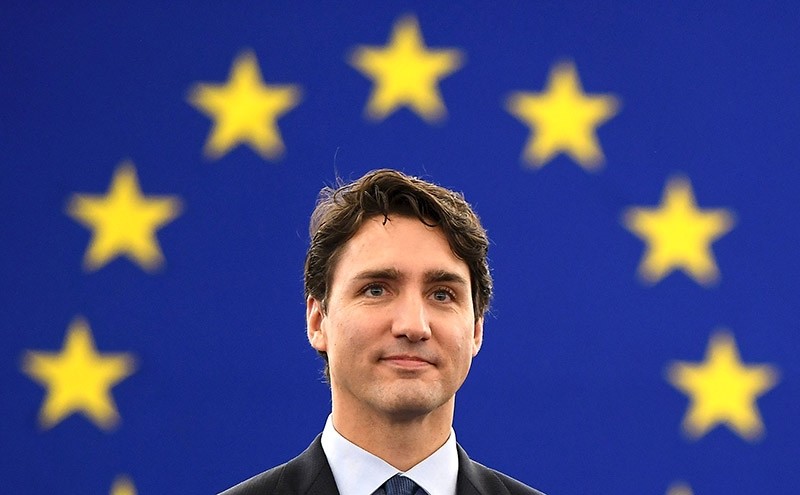 Canadau2019s Prime Minister Justin Trudeau arrives to deliver a speech during a plenary session a day following a voting session on the EU-Canada Comprehensive Economic and Trade Agreement (CETA) (AFP Photo)
by Feb 16, 2017 12:00 am

Canadian Prime Minister Justin Trudeau told European lawmakers Thursday that the world is better off when the EU is strong, as anti-Brussels sentiment soars following the Brexit vote and Donald Trump's victory.

"Canada knows that an effective European voice on the global stage isn't just preferable, it's essential," Trudeau told the assembly in Strasbourg, France.

Trudeau also hailed the 28-nation bloc as "a truly remarkable achievement and an unprecedented model for peaceful cooperation."

The European Parliament on Wednesday solidly backed an EU-Canada trade accord after nearly eight years of painful negotiations and activist anger.

Opponents to the deal, known as CETA, slam the deal as a "Trojan horse" to big business and a danger to health, democracy and the rule of law.

But Trudeau, speaking in a mix of French and English, said that the EU and Canada "have made a big step to deepen our relationship and increase commerce that is both free and progressive".

Trudeau spoke three days after meeting in Washington with US President Trump, who has vowed to embrace protectionism and reject big trade deals in order to preserve US jobs.

Trudeau said Trump expressed "a very strong focus on getting things done for those who supported him, believed in him."

The EU-Canada deal, known as CETA, could be an example for Trump, Trudeau said.

"Demonstrating that good relations with one's neighbors is a good way of getting things done, I think, that everyone is going to benefit from around the world," he told a press conference after his speech.

Trudeau's kind words to Europe are in contrast to Trump who has been critical of the EU.

Trump has that Britain's vote to leave was a good idea and that other countries would likely follow suit.

He is also expected to nominate a pro-Brexit ambassador to the EU who believes that the bloc will disintegrate and that the euro single currency will fail.

In contrast, Canada moves closer to Europe with CETA.

The deal will remove 99 percent of non-farm customs duties between the two sides, a big win for exporters on both sides of the Atlantic.

And unlike classic trade deals, CETA harmonizes regulations on matters such as health and the environment, which is, however, major concern for activists.