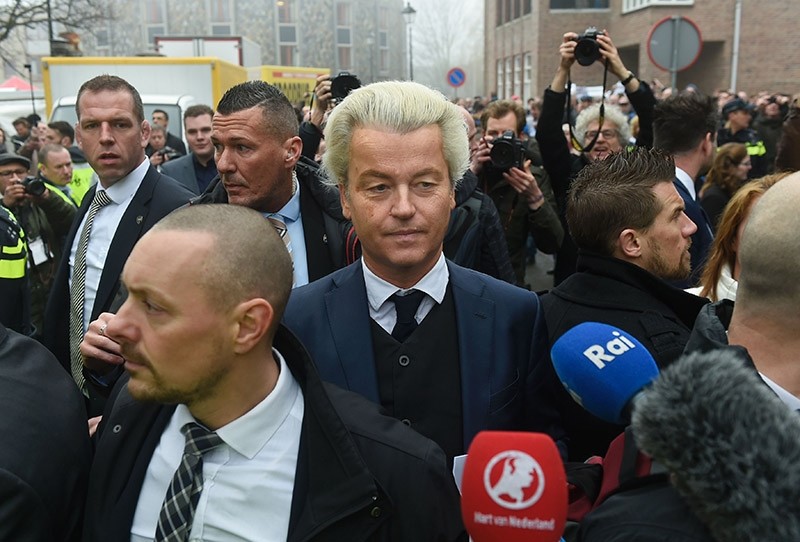 Dutch far-right politician and leader of the Freedom Party Geert Wilders (C) looks towards journalists as he officially launches his parliamentary election campaign in Spijkenisse on February 18, 2017. (AFP Photo)
by Feb 18, 2017 12:00 am

Firebrand Dutch anti-Islam MP Geert Wilders launched his election campaign Saturday with a stinging attack on the country's Moroccan population, calling some "scum" and saying he wanted to make The Netherlands "ours again".

Wilders has been leading opinion polls ahead of crunch elections on March 15, seen as a litmus test of European politics after Brexit and Donald Trump's victory in the United States.

"If you want to regain your country, if you want to make The Netherlands for the people of The Netherlands, your own home again, then you can only vote" for his Freedom Party, Wilders said in the blue-collar town of Spijkenisse, not far from Europe's largest port of Rotterdam.

"Please, make The Netherlands ours again," said the far-right politician, as a small group of supporters chanted "Wilders! Wilders!" in the background.

"Dutch people who want their country back will vote for us irrespective of their education or background," he added.

The MP, who has vowed to ban the Koran and close mosques should he win power, was convicted of discrimination in December over previous comments he made about Moroccans living in The Netherlands.

But his words asking party faithful in 2014 if they wanted "fewer Moroccans" in The Netherlands have found some traction among traditional supporters worried about immigration and terrorist attacks across Europe in recent years.

The latest combined opinion polls give Wilders and his PVV party between 24-28 seats in the 150-seat lower house of parliament, two to four seats ahead of Liberal Prime Minister Mark Rutte's ruling VVD party.

Support for Wilders -- who posed for selfies and shook hands with citizens on the town's medieval square -- varied widely and after he left several angry arguments between backers and opponents broke out.

"We are all voting for Wilders this year," said one supporter Danny, 59, who declined to give his surname "because that's dangerous in this country these days."

"It's not safe in the streets anymore especially in the big cities," he told AFP stroking his beard, as he watched Wilders walk around alongside heavy police protection.

Wilders's views have seen him receive death threats including from Deash and Al-Qaeda. He is guarded at all times and has been called the "best protected man in The Netherlands".

Pieter Kamerling, 40, a PVV organizer in the area, said: "We are going to free this country. Brussels has the key to our home and we're going to take it back. Geert will ensure that we do that."

Martin Bosma, regarded as Wilders's right-hand man and fellow PVV parliamentarian told AFP his party will look for coalition partners should they win the elections.

But he admitted "it will be difficult," as most major Dutch political parties -- including Rutte's VVD -- refuse to work with the PVV after Wilders's Moroccan comments and his conviction.

"Geert Wilders is polarizing people," said Theo de Boer, 50, as he walked away from the market clutching a bunch of flowers.

"He discriminates and I totally disagree with him. We have a constitution and freedom of religion is one of its most important pillars," De Boer said.

Some locals were conflicted about Wilders.

"But he causes a whole lot of hatred and has no real solution," she said as she dropped a batch of battered cod into a fryer.

"Chances of him ruling are slim, because nobody really wants to," Sleurink