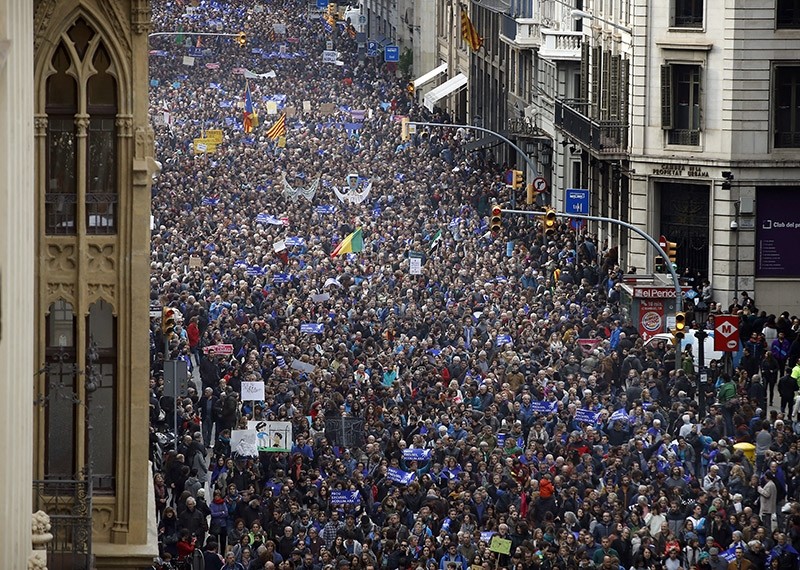 Thousands of people march under the slogan 'Stop excuses. Let's take in now' during a demonstration to call for the reception of migrants and refugees in Barcelona, northeastern Spain, 18 February 2017. (EPA Photo)
by Associated Press Feb 18, 2017 12:00 am

At least 160,000 protesters marched Saturday in Barcelona to demand that Spain's conservative-led government increase its efforts to take in refugees from war-torn countries like Syria.

Marchers held a large banner and signs in Catalan with the slogans "Enough Excuses! Take Them In Now!" and "No More Deaths, Open The Borders!" as they made their way through the city center to its Mediterranean coast.

"There is an ample consensus in Catalonia to demand that the (government's) commitments are upheld," said organizer Ruben Wagensberg.

In Sept. 2015, Spain's government pledged to bring 17,337 refugees in within two years: 15,888 from camps in Italy and Greece and 1,449 from Turkey and Libya. On Thursday, a group of 66 refugees— 65 Syrians and one Iraqi— who arrived in Madrid raised the total number of refugees that Spain has taken in to just 1,100.

"It is very important that in a Europe of uncertainty where xenophobia is on the rise for Barcelona to be a capital of hope," Colau said.

Colau had also criticized the federal government's stance toward refugees in December at a Vatican conference on Europe's refugee crisis.

Germany decided last year on more than 695,000 asylum applications. Nearly 60 percent of the applicants were granted either full refugee status or a lesser form of protection.