French presidential candidate steps back over colonization criticism after backlash 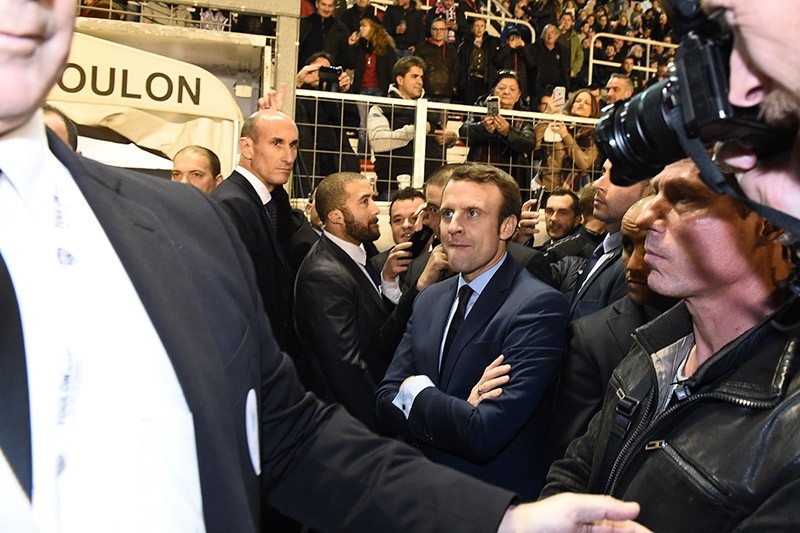 French presidential election candidate for the En-Marche movement Emmanuel Macron (C) looks at the French Top 14 rugby union match between RC Toulon and Lyon on Feb. 18, 2017 at the Mayol stadium in Toulon. (AFP Photo)
by Feb 19, 2017 12:00 am

French presidential candidate Emmanuel Macron attempted on Saturday to end the controversy triggered by his comments condemning France's
colonial past in Algeria.

Macron, a pro-European independent centrist who several recent polls have shown to be a frontrunner, was hit by a wave of criticism this week from his right-wing opponents after he said France's history in Algeria was a "crime against humanity."

Algerians lived under French rule for 132 years until it won a bloody war of independence in 1962. The conflict killed 1.5 million Algerians, the Algerian government says.

"I am sorry to have offended you, to have hurt you," Macron said on Saturday in the southeastern city of Toulon, responding to criticism of his comments from French nationals who had to leave Algeria in 1962.

"But we must face this common, complex past if we want to move on and get along," he said, alluding to historical links between Algeria and France, where many citizens hold both nationalities.

Macron also asked the audience to applaude the "harkis", the Algerian soldiers who fought for the French during the war of independence and were given French nationality.

He accused the far-right National Front, led by Marine Le Pen, of preventing hundreds of people from attending the speech.

About 100 demonstrators shouted "Macron, treason" outside the building where he made the speech and attempted to block the only entrance to the room.

Le Pen, who Macron looks likely to face in a second-round run-off, condemned his comments on Algeria earlier this week, as did conservative candidate François Fillon in an interview with daily Le Figaro.

"The crime against humanity, it's the Shoah, genocides, slavery," said Fillon, whose status as favourite to win the presidency in May has evaporated in the past three weeks.

"Daring to compare colonisation with these dreadful events is a true flaw," he said.