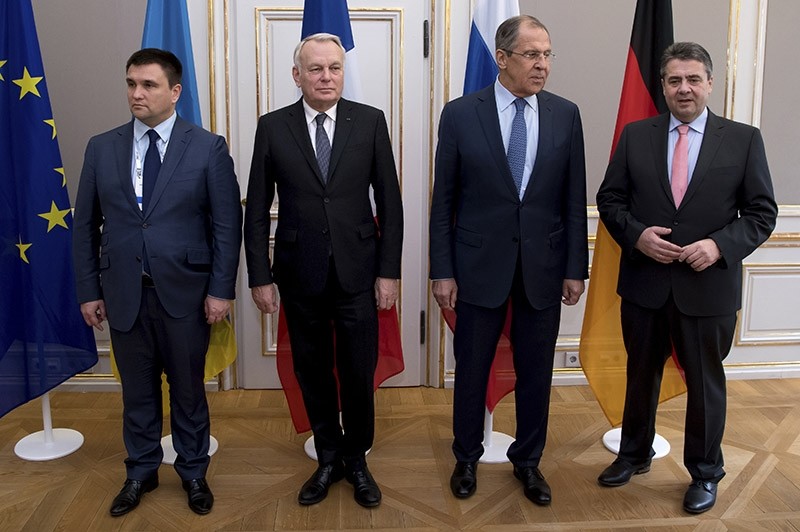 A truce between government forces and pro-Russian rebels in eastern Ukraine will come into force Monday, Moscow and Kiev said, though some separatists were already labeling it unfeasible.

Saturday's announcement comes after nearly 30 people lost their lives as violence flared again earlier this month in a conflict that has left more than 10,000 people dead since April 2014.

In another sign that tensions are far from easing up, Moscow signed a decree Saturday recognizing passports issued by rebel authorities in Ukraine's separatist regions, triggering a protest from Kiev which called it a "provocation".

The new ceasefire deal was announced after the foreign ministers of Ukraine, Russia, Germany and France met on the sidelines of a security conference in Munich, with Russia's Sergey Lavrov calling it a "positive" development.

But the warring sides had already agreed on Wednesday that they would withdraw heavy weapons from the frontline by next Monday in line with a tattered peace plan, and Lavrov warned that there had been no "major progress" in Munich.

Ukraine's Foreign Minister Pavlo Klimkin confirmed the deal, warning that the ceasefire must turn into more than a "political slogan" in practical terms.

"This has to be the real situation -- and if that's not the case, we will have to have fresh negotiations," he told Ukrainian reporters in Munich.

Pro-Russian separatists on the ground declined to confirm they were planning to respect the new ceasefire, with some saying it was unfeasible for it to come into force as early as Monday.

"There has been artillery fire all day," said Eduard Basurin, a senior official in the self-declared Donetsk People's Republic.

"What truce are they talking about? I don't see the point in declaring a truce."

He added that "for the moment on the Ukrainian side, we see no withdrawal" of heavy weapons as detailed under the latest plan.

Several ceasefires have already faltered in a bid to end Europe's only armed conflict, thanks to regular flare-ups in fighting between the pro-Russian rebels -- whom Moscow has furiously denied giving financial and military support, despite Western allegations -- and Ukrainian troops.

The most recent violence earlier this month saw some 30 soldiers and civilians killed in the flashpoint town of Avdiivka.

"Sometimes we must admit that there is a lack of willingness on the ground," French Foreign Minister Jean-Marc Ayrault said Saturday.

"Ukrainian citizens and stateless persons who live there" will now be able "to enter Russia and exit Russia without a visa," the decree said.

Moscow described the move as "temporary" until a "political solution" is found to bring peace to the region.

But Ukraine's President Petro Poroshenko blasted the decree as "fresh proof of the Russian occupation and violations by Russia of international law", adding it was "highly symbolic" that it was published while he was meeting in Munich with US Vice-President Mike Pence, who informed him of the move.

Ganna Gopko, head of the foreign affairs committee of the Ukrainian parliament, told AFP: "It's a deliberate provocation by Putin."