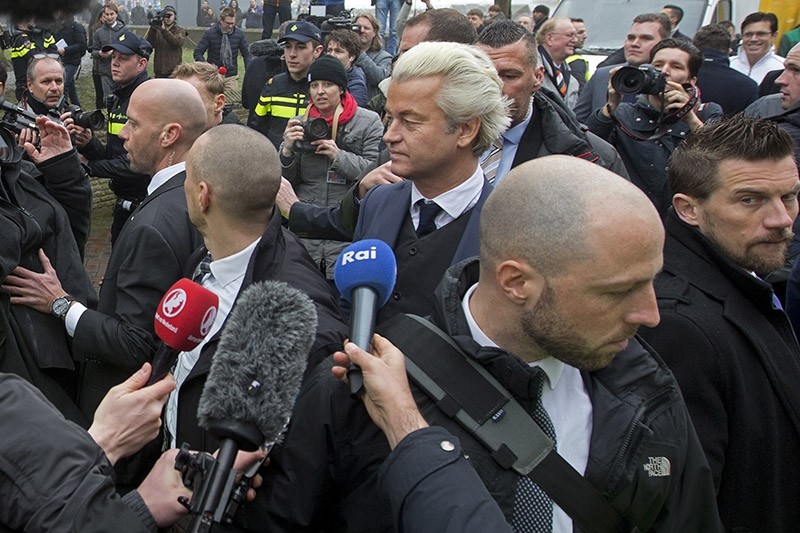 In this Saturday Feb. 18, 2017, image firebrand int-islam lawmaker Geert Wilders, center, is protected by police and security officers during an election campaign stop in Spijkenisse, near Rotterdam, Netherlands. (AP Photo)
by Compiled from Wire Services Feb 23, 2017 12:00 am

Anti-Islam Dutch MP Geert Wilders and his far-right Freedom Party suspended all public activities Thursday pending a probe after a police agent was arrested for leaking information about him to a Moroccan gang.

"Very disturbing news. The Freedom Party is suspending all public activities until all facts in connection with the investigation are known," Wilders said in a Tweet, as Dutch political parties gear up for crunch elections three weeks from now.

Wilders, who has courted controversy with his hardline anti-Islam, anti-immigrant stance and his incendiary insults against Moroccans, has long been under 24-hour police protection.

The Netherlands holds its parliamentary election on March 15 and Wilders' Party of Freedom could well come out on top, even though he is likely to be kept out of any coalition government.

Despite Wilders' security concern, the government said it was safe for him to continue campaigning.

"All politicians, Geert Wilders and others, can safely get on the streets. We guarantee that," Dutch Security and Justice Minister Stef Blok told NOS network. The minister had discussed the issue with Wilders.

The extent of the breach and its impact on the tight security cordon that constantly surrounds Wilders was not immediately clear.

Wilders was convicted last year for anti-Moroccan comments and while campaigning just last weekend referred to "Moroccan scum" who commit crimes in the Netherlands. His manifesto includes closing Dutch borders to all migrants from Muslim nations, banning the Quran and shutting all mosques in the Netherlands.