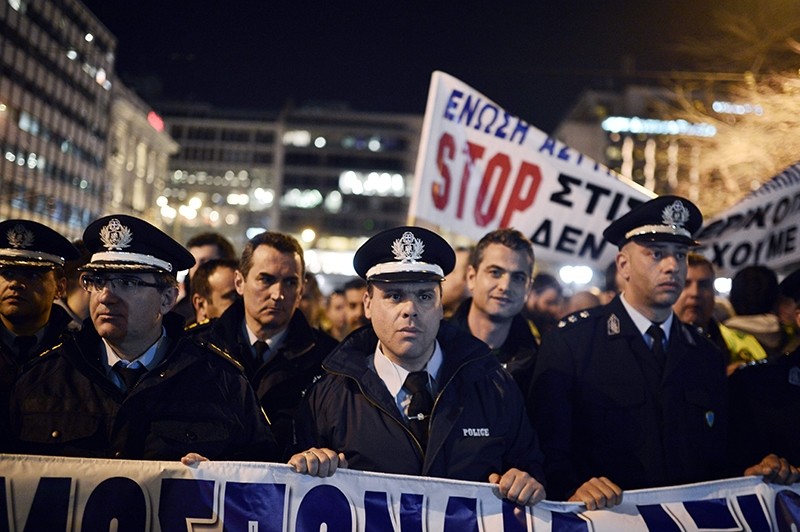 Greek police officers demonstrate during an anti-austerity protest with firefighters and coastguards on February 23, 2017 in front of the greek parliament in central Athens (AFP Photo)
by Anadolu Agency Feb 23, 2017 12:00 am

Hundreds of Greek police officers, firefighters and Coast Guard officers protested the government policies in the capital Athens on Wednesday.

The protesters gathered outside the parliament at the central Athens square, demanding higher wages and improvement of their working conditions.

"The government has, once again, made the officers take to the streets to demand things that go without saying," said Stavroula Tzatzana, head of the Police Officers Association of Rodopi, Northern Greece.

"The government used to support all of our demands when they were in opposition," she said, adding that the reason behind their demands is that they want to be able to provide security to the community.

Thousands of security forces members have lost their jobs over the past few years, due to budget cuts resulting from the economic crisis. Those who have kept their jobs have suffered a severe loss of income.

The protesters carried banners reading "protect those who protect you" and "protect our rights, protect our lives".

According to Tzatzana, more than one hundred police officers died on the job in the past decades while thousands of others were injured.

Before the SYRIZA party came to power in 2015, it had promised higher wages, hiring of additional personnel and an end to budget cuts, among other things.