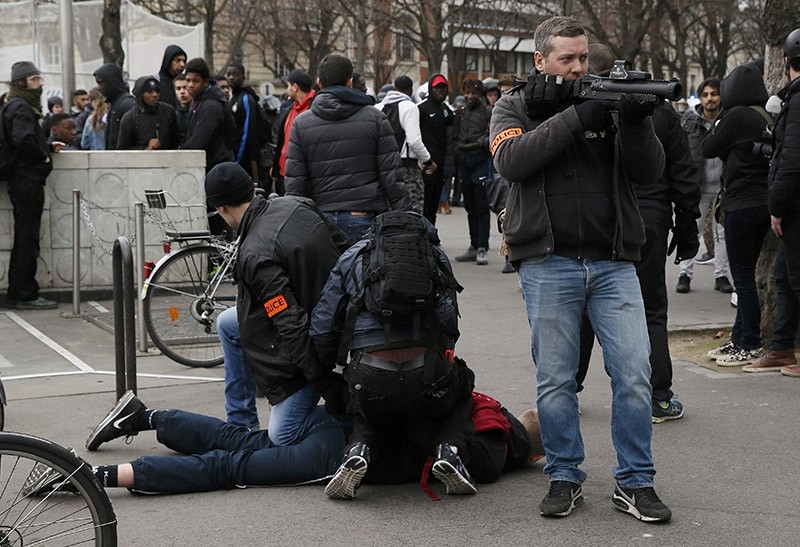 French plainclothes police apprehend a youth during a demonstration against police brutality after a young black man was severely injured during his arrest earlier this month, in Paris, France on Feb. 23, 2017. (Reuters Photo)
by Anadolu Agency Feb 23, 2017 12:00 am

Hundreds of high school students protesting police brutality on Thursday following the alleged rape of a young black man, are currently blocked by riot police at the Place de la Nation in the eastern side of the French capital.

Police said eight were arrested for throwing projectiles at them, "stealing" and causing damage during the "unauthorized" protest.

Tension in French suburbs has simmered over the alleged rape of a 22-year-old man -- identified only as Theo -- by police during an ID check.

One officer has been charged with rape while the others face charges of voluntary aggravated violence. The officers denied doing it intentionally and said it was an "accident".

More than 300 people have been arrested since the outbreak of riots on Feb. 4.

At least 10 Parisian high schools are totally blocked and classes have been disrupted in 16 others, according to education authorities.

A similar protest is taking place in Montpelier, in southern France.

The unrest which started in several Paris suburbs, quickly spread to Lille, Marseille and other French cities, carrying echoes of riots that rocked the country in 2005 over the deaths of Bouna Traore, 15, and Zyed Benna, 17 -- electrocuted in a power substation after being chased by police in the Parisian suburb of Clichy-sous-Bois.