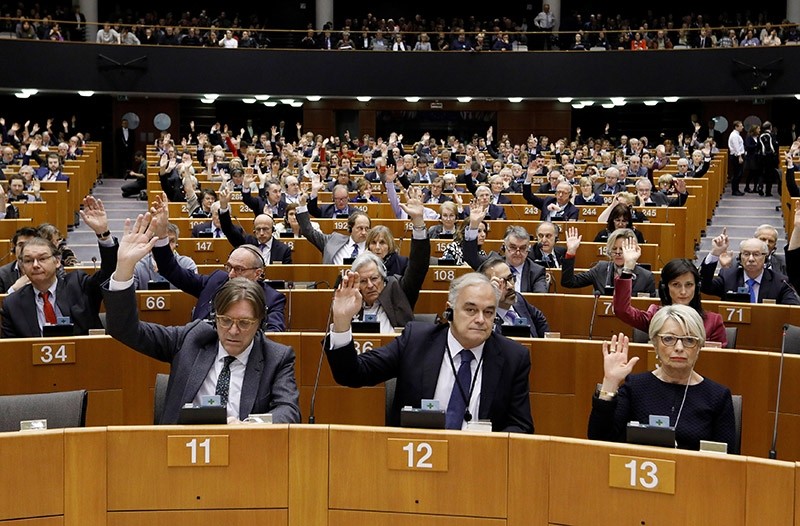 Members of European Parliament vote to decide whether to lift the immunity of French far-right presidential candidate Marine Le Pen after she came under investigation for tweeting pictures of Daesh violence. March 2, 2017. (Reuters Photo)
by Mar 02, 2017 12:00 am

The European Parliament on Thursday lifted French far-right leader Marine Le Pen's immunity from prosecution over her tweeting of images of Daesh atrocities.

EU lawmakers voted to deprive National Front (FN) leader Le Pen of her immunity in the case, launched by French prosecutors in 2015 over a graphic series of images on Twitter.

They included a photo of the decapitated body of US journalist James Foley.

"I think the result is clear, a big majority is in favour of the lifting of immunity," acting parliament speaker Dimitrios Papadimoulis said.

But it concerns only the tweets, and not a separate probe into allegations that Le Pen misused public funds when hiring a parliamentary aide, they said.

On Tuesday Le Pen dismissed efforts to lift her immunity as "part of the system that wants to stop the French people's candidate that I am."

Le Pen has so far refused to attend an interview over the tweet investigation with police in the Paris suburb of Nanterre, citing her status as an MEP.

But her senior aide has been placed under formal investigation for "the dissemination of violent images".

Le Pen, who has over 830,000 Twitter followers, addressed the tweets to a French TV journalist whom she accused of likening her party to the jihadist group.

The images were tweeted with the caption "This is Daesh" and showed Foley's bloodied body with his decapitated head on his torso, as well as a man on fire in a cage, and a victim being driven over by a tank.

Foley, a freelance journalist, was captured in Syria in 2012 and beheaded in August 2014.

Foley's bereaved parents John and Diane said they wanted the images removed immediately, accusing Le Pen in a statement of using the "shamefully uncensored" image for her own political ends.

French police have also opened a probe against Gilbert Collard, a National Front lawmaker in France, who had tweeted a similar violent image on the same day and for the same reason.

But last month the French national assembly refused to consider a request to lift his immunity after deciding it was not "sufficiently specific."