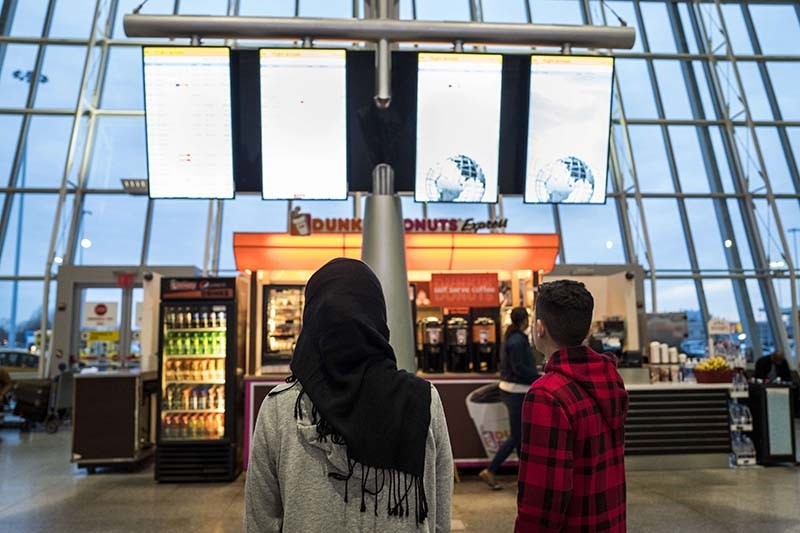 A young woman wearing a Hijab watches the arrivals board at the international terminal at John F. Kennedy International Airport, March 6, 2017 (AFP Photo)
by Compiled from Wire Services Mar 14, 2017 12:00 am

The Court of Justice of the European Union ruled on Tuesday that employers can ban their workers from wearing any religious symbol, including headscarves worn by some Muslim women.

In a ruling on two separate appeals made by Belgium and France over the headscarf ban, the court said companies could bar staff from "visible wearing of any political, philosophical or religious sign".

In both cases, the appeal courts of Belgium and France had urged the EU court to give a joint judgement on the issue.

The EU court further said the decision to ban such symbols at workplaces was not discriminatory.

The ECJ ruled on the cases of two female employees in Belgium and in France, who were dismissed for refusing to remove their headscarves, a day before a Dutch parliamentary election dominated by the issue of immigration and integration.

The court's ruling considered the case of a Belgian woman working as a receptionist for G4S Secure Solutions, which has a general ban on wearing visible religious or political symbols.

The court's advocate general last year recommended that companies should be allowed to prohibit headscarves as long as a general ban on other symbols was in place. Companies should though consider the conspicuousness of such symbols and the nature of the employee's activities.

The court's ruling also covers a French IT consultant who was told to remove her headscarf after a client complained.

The advocate general's advice in the French case was that a rule banning employees from wearing religious symbols when in contact with customers was discrimination, particularly when it only applied to Islamic headscarves.

An opinion of an advocate general is not binding but is followed by the court in the majority of cases.