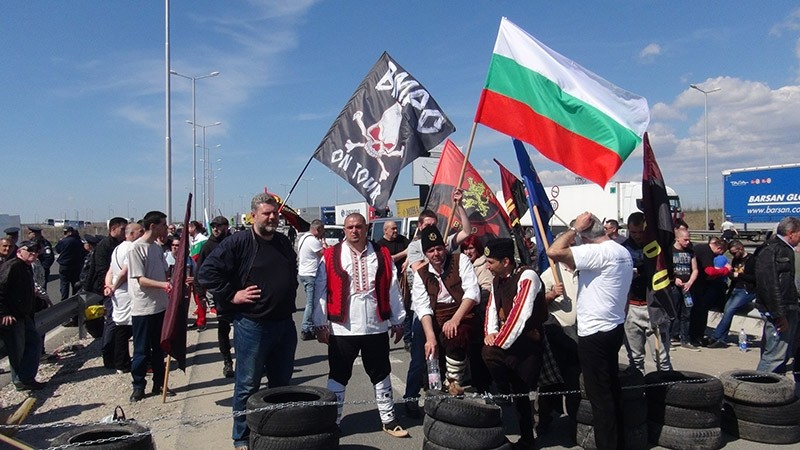 Some Bulgarians are unhappy about Turkish-Bulgarian dual citizens, who currently live in Turkey, travelling to Bulgaria to cast their votes in the upcoming Bulgarian general elections on Sunday. They expressed their displeasure through protests and by blocking the Turkish-Bulgarian border gates.

A group of political protestors gathered Tuesday at Bulgaria's Kapitan Andreevo, Lesevo and Malko Tarnovo border gates, which are located across their Turkish counterparts Kapıkule, Hamzabeyli and Dereköy, and created barricades using chains and car tires.

Bulgarian police units took tight security measures in the area, and the passage of vehicles from Turkey was not allowed a significant portion of time.

Meanwhile, officials of Kapıkule customs gate said that vehicles continued to pass through the Turkish border to Bulgaria without any problems.

The political parties "Movement for Rights and Freedoms," and "Democrats for Responsibility, Freedom and Tolerance," which were established by Turkish minorities in Bulgaria, will also participate in the general elections, a fact that has disturbed some ethnic Bulgarian political parties that are afraid to lose voters.

According to the 2011 census, there are 588,318 Bulgarians of Turkish descent in the country, making them the country's largest ethnic minority with 8.8% of the population.

Thousands of others, who still hold Bulgarian citizenship, have migrated to Turkey.

Bulgarian Turks are the descendants of Turks who settled into the region after the Ottoman Empire conquered the Balkans in the late 14th and early 15th centuries, as well as Bulgarian converts to Islam who became Turkified during the Ottoman reign.