France hit by protest against police brutality before election 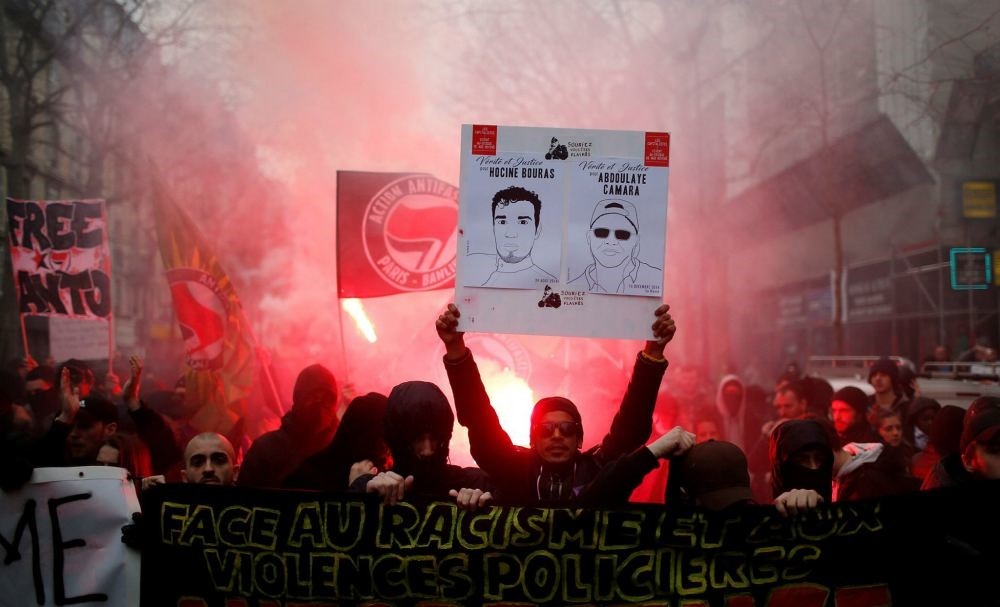 People shout slogans during a demonstration against police brutality in Paris, March 19.
by Compiled from Wire Services Mar 21, 2017 12:00 am

Ahead of the presidential election, Paris streets turned violent once again as French people have continued to protest police brutality

French police fired tear gas in clashes with hooded demonstrators in Paris on Sunday as thousands marched against "police brutality" after the alleged rape of a black man with a police baton.

The February attack on the 22-year-old man, identified only as Theo, cast a spotlight on rough policing methods in France and triggered riots in the gritty suburbs surrounding Paris.

He said one of the police officers assaulted him with a baton, which has led to rape charges against him. Four officers have been suspended pending investigation.

Police said around 7,000 to 7,500 people joined the march to Place de la Republique in central Paris, where demonstrators chanted "no justice, no peace" and "emergency, emergency, police are killing with impunity."

Officers in riot gear used tear gas against some of the masked protesters who hurled back the canisters and other objects, photographs showed.

Two police officers were slightly injured in the clashes and taken to hospital, authorities said, while 11 protesters were arrested.

Many in the crowd, who wore hoods, face masks, and sunglasses, carried anarchist and "Antifa" flags, and police said five banks had their windows smashed and vandalized.

"We would like for justice to be served," co-organizer Amal Bentounsi told the crowd.

Her brother Amine was shot dead in 2012 by an officer who was handed a five-year suspended sentence on appeal.

"My brother's killer was convicted but there are other families for whom it is not the case," she said.

Fatiha Bouras, who said she is the mother of a victim, added there were "too many police killings, they have to stop."

"It's only Arabs and blacks who die," she said.

In October 2005, two teenagers were running from police and decided to hide in an electricity substation and got electrocuted by accident on their own which sparked weeks of riots.

Nearly 3,000 protesters and rioters were arrested and close to 10,000 vehicles were torched.

Other acts of vandalism took place as well all over France and resulted to about 200 million euros in damages.

A lot of the protests taking place right now in support of Theo and against perceived police brutality have very violent elements within them, mainly coming from the hooded anarchists within their ranks, who refuse to show their faces or reveal their identities in any way.

Disillusioned residents of housing projects in towns like Les Mureaux, west of Paris, are deeply skeptical of campaign promises and the political elite. French presidents have tried for decades to fix the suburbs, and repeatedly failed.

Some 50 young people were put in custody earlier in March in Saint-Denis, north of Paris, for allegedly throwing stones at police cars, setting fires and lobbing smoke bombs into a school.

The reason for the violence was not clear, but the alleged rape has sparked many angry protests that have turned violent.

Most were released without charges the following night. Eight minors were scheduled to appear before a juvenile court judge Thursday in the nearby town of Bobigny on charges of violence, "armed gathering" and "rebellion."

Conservative presidential candidate Francois Fillon, whose campaign is entangled in its own legal cases, said what happened in Saint-Denis was "a real riot, followed by an urban guerrilla in the streets."

Marine Le Pen's Front National had stated, "In the face of gang violence, the state must be unyielding and respond with zero tolerance. Marine Le Pen is the only presidential candidate to propose breaking with this culture of permissiveness."

Marion Maréchal-Le Pen tweeted out "#MarchePourlaJusticeandladignite [March for Justice and Dignity] = Walk of hatred and violence against the police and France."
RELATED TOPICS