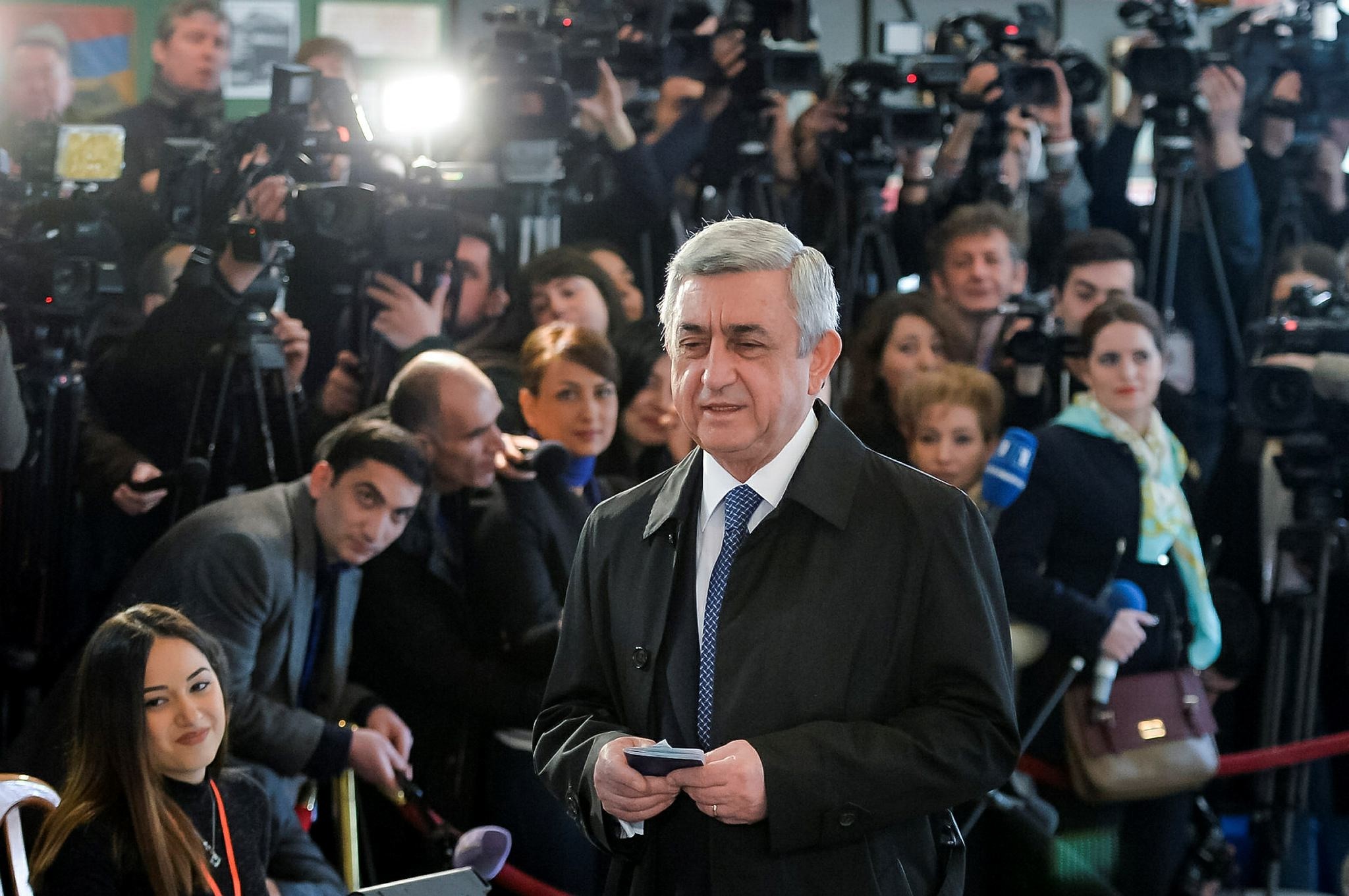 Armenia's President Serzh Sargsyan arrives at a polling station during a parliamentary election in Yerevan, Armenia. (AP Photo)
by Associated Press Apr 02, 2017 12:00 am

Armenians voted Sunday in the country's first parliamentary election since the ex-Soviet nation modified its constitution to expand the powers of parliament and the prime minister.

An exit poll released after voting stations closed showed the Republican Party of Armenia's president, Serzh Sargsyan, getting 46 percent of the vote, trailed by the bloc led by businessman Gagik Tsarukian with 29 percent.

The polls showed two other parties clearing the 5 percent barrier to be apportioned seats in parliament.

Critics see the amendments as part of Sargsyan's efforts to retain control of the country after he steps down in 2018 due to term limits. If his party controls parliament, he could be appointed prime minister after leaving the presidency.

But the 62-year-old Sargsyan, who has led Armenia since 2008, has rejected the allegations, describing the constitutional changes approved in a 2015 referendum as steps to strengthen democracy.

"We have set a task to make resolute step toward developing a European-style democracy and strengthening democratic institutions," Sargsyan said.

The constitutional changes, set to take force after Sargsyan's term ends, envisage largely symbolic powers for the nation's president, who will be elected by parliament instead of by popular vote.

Prime Minister Karen Karapetian has spearheaded the Republican Party's campaign, promising to encourage foreign investment in the economically struggling nation. Tsarukian also has pledged to attract up to $15 billion in foreign investment from Persian Gulf countries and elsewhere.

Sergei Minasian, an independent political expert based in Yerevan, said the ruling party had a "significant advantage" in the campaign, thanks to its use of administrative resources.

The European Union mission in Yerevan has expressed concern about "allegations of voter intimidation, attempts to buy votes, and the systemic use of administrative resources to aid certain competing parties." It didn't name any parties.

The vote was monitored by observers from the Organization for Security and Cooperation in Europe. A private observer mission of Western ethnic Armenians, including film director Atom Egoyan and Serj Tankian, vocalist for the heavy metal band System of a Down, also monitored the election.

Landlocked Armenia, one of the poorest of the ex-Soviet nations, borders Iran, Azerbaijan, Georgia and Turkey.

Armenia is also a member of Moscow-dominated economic and security alliances and hosts a Russian military base.

The country has seen some unrest in recent years. In 2015, thousands demonstrated in Yerevan for weeks protesting electricity price hikes.

In July, several dozen armed men captured a police compound in the capital, demanding freedom for an opposition activist and the government's ouster. They held several police officers and medics hostage before eventually releasing them.

The two-week siege left two people dead and several wounded and triggered rallies in support of the gunmen.

Last month, several hundred protesters rallied in Yerevan after an activist who fed the siege perpetrators died in prison while on a hunger strike.