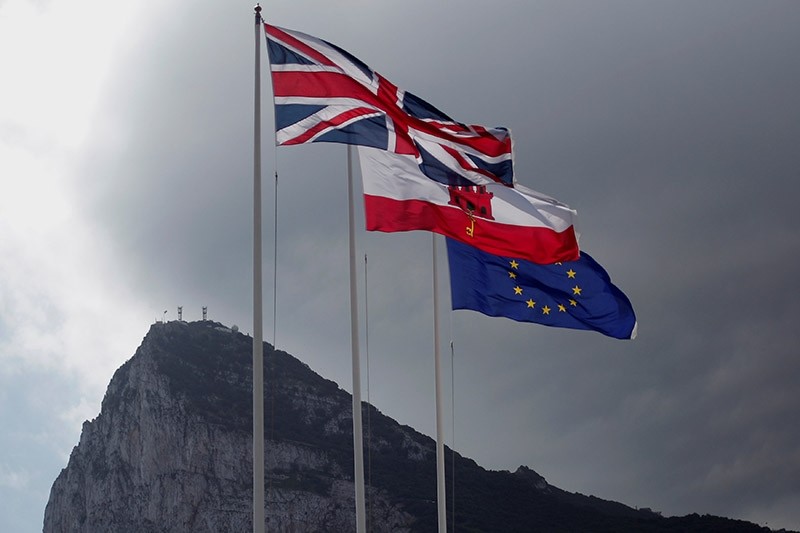 The Union Jack (L), the Gibraltarian flag (C) and the EU flag are seen flying, at the border of Gibraltar with Spain, in front of the Rock in the British overseas territory of Gibraltar, historically claimed by Spain April 3, 2017. (Reuters Photo)
by Compiled from Wire Services Apr 03, 2017 12:00 am

EU officials urged dialogue over the post-Brexit future of the Gibraltar on Monday as Foreign Secretary Boris Johnson said the status of the Spanish-claimed British territory "cannot conceivably change" without the agreement of its people.

Schinas said the commission supports a draft EU negotiating directive that says no Brexit agreement will apply to Gibraltar without the consent of Spain and Britain.

A spat over Gibraltar grew over the weekend after a former Conservative minister compared Britain's potential defence of the territory to the 1982 war between Britain and Argentina over the Falklands, or Malvinas, islands in the south Atlantic.

Michael Howard said Sunday that Prime Minister Margaret Thatcher had sent British warships to the South Atlantic in 1982 "to protect another small group of British people against another Spanish-speaking country."

"And I'm absolutely clear that our current woman prime minister will show the same resolve in relation to Gibraltar as her predecessor did," Howard told the BBC.

The comments were condemned by opposition politicians in Britain, and drew a bemused reaction in Madrid.

Spanish Foreign Minister Alfonso Dastis told reporters in Madrid on Monday that he was "a little surprised by the tone of comments coming out of Britain, a country known for its composure."

Ahead of an EU Foreign Affairs Council meeting Luxembourg, Johnson was asked what he planned to say about Gibraltar.

"The position of the government is very, very clear, which is that the sovereignty of Gibraltar is unchanged and is not going to change, and cannot conceivably change without the express support and consent of the people of Gibraltar and the United Kingdom," he said.

Prime Minister Theresa May reaffirmed Britain's support for the territory in a phone call to Chief Minister Fabian Picardo on Sunday.

Spain has a longstanding territorial claim on Gibraltar, an enclave of 32,000 people on the southern tip of the Iberian Peninsula that was ceded to Britain in 1713.