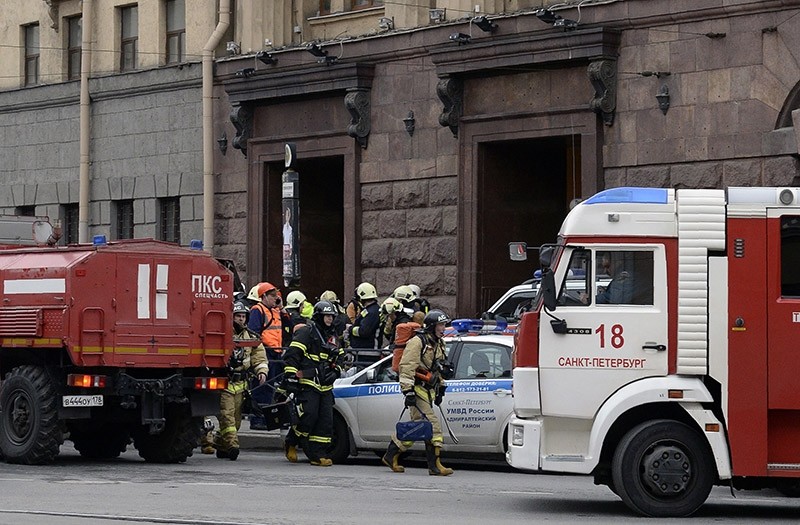 Russian security agents on Thursday arrested three people suspected of links to a suicide bomber accused of attacking the city's subway and deactivated an explosive device in the apartment where they lived.

The Investigative Committee said the suspects are residents of the former Soviet Central Asia region like the bomber, 22-year-old Akbarzhon Dzhalilov, a native of Kyrgyzstan. Dzhalilov blew himself up on a busy subway line Monday, killing himself and 13 others and wounding over 50 people.

The committee, the nation's top criminal investigation agency, said investigators also found objects that would help advance the probe during a search of the home on St. Petersburg's eastern outskirts.

The Federal Security Service, the main KGB successor agency, said in a statement carried by Russian news agencies that its experts defused a self-made explosive device at the apartment. The news reports said three people were arrested.

An unidentified law enforcement official told the Tass news agency that investigators were checking information that Dzhalilov may have trained with the Daesh terrorist group in Syria.

Russian President Vladimir Putin has said between 5,000 and 7,000 people from Russia and other former Soviet republics were fighting alongside Daesh and other terrorists in Syria. He has named the Daesh threat as one of the reasons behind Russia's military campaign in Syria in support of the Assad regime.

Thursday's arrest came a day after law enforcement agencies detained eight Central Asian migrants suspected of acting as recruiters for Daesh and al-Qaida's Syria branch. The investigators found no immediate evidence of their involvement in the subway attack.

No one has claimed responsibility for Monday's subway bombing, but Russian trains and planes long have been targeted by terrorists bombings.

One of the victims of Monday's attack, 50-year-old Irina Medyantseva, an artist well-known for the dolls she made, was buried Thursday in a funeral attended by a few dozen relatives and friends.

"I'm thankful to all those who want to help us," said her husband, Alexander Kaminskiy. "The country and the entire world share our pain."