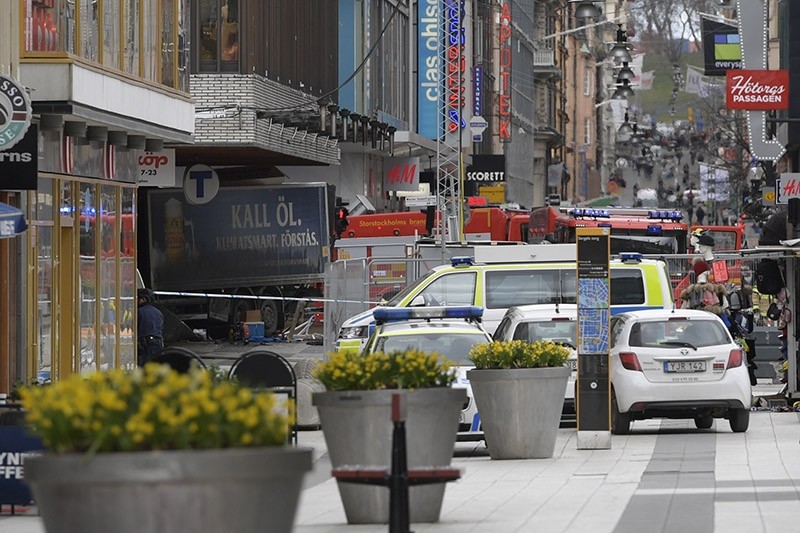 A massive manhunt was underway for the driver of a stolen truck that ploughed into a crowd outside a busy department store in central Stockholm Friday, killing four and injuring 15, Swedish police said.

A national police chief, Stefan Hector, said the police's "working hypothesis is that this is a terror attack."

One man was arrested in connection with the attack but the driver remained at large, police said.

Prime Minister Stefan Lofven, who cut short a visit in southwestern Sweden to return to Stockholm, said he had strengthened the country's border controls.

"Terrorists want us to be afraid, want us to change our behaviour, want us to not live our lives normally, but that is what we're going to do. So terrorists can never defeat Sweden, never," he said.

If confirmed as a terror attack, it would be Sweden's first such attack with a deadly outcome.

Pictures taken at the scene showed a large blue truck with a mangled undercarriage smashed into the Ahlens department store.

One witness identified only as Dimitris told the Aftonbladet daily the truck came "out of nowhere."

"I couldn't see if anyone was driving but it was out of control. I saw at least two people get run down. I ran as fast as I could away from there," he said.

Another shopper, 66-year-old Leander Nordling, was at Ahlens when he suddenly heard a loud bang.

"It sounded like a bomb exploding and smoke starting pouring in through the main entrance," he told daily Aftonbladet.

He and fellow shoppers took refuge in a storage room inside the department store.

"After that the building was evacuated ... There were a lot of guards who took care of us outside and they urged us to leave the scene immediately," Nordling said.

Video footage taken from above showed scores of people streaming down the street in terror.

A spokeswoman for beer company Spendrups told AFP that the truck involved "had been stolen during a delivery to a restaurant."

The man arrested in a suburb north of Stockholm was detained after his appearance matched that of a man in a picture released by police and wanted in connection with the attack.

Friday's attack was the latest in a string of similar assaults with vehicles in Europe, including in London, Berlin and the southern French city of Nice.

'Attack on us all'

The attack occurred just before 1300 GMT at the corner of the store and Drottninggatan, the city's biggest pedestrian street, above ground from Stockholm's central subway station.

Thick smoke billowed from the scene, while the area was blocked off by police and crowds gathered around the police cordon.

The centre of the usually buzzing city was in lockdown, with the central train station evacuated and other stores quickly emptied of shoppers.

The Stockholm metro was also completely shut down for several hours before resuming in the early evening, with the attack taking place at the city's T-Centralen station, through which all the city's lines pass.

Cinemas, shopping malls and other public buildings were also evacuated.

The area around the attack was cordoned off, but other streets in the city were packed for hours with pedestrians trying to find a way home.

Helicopters could be heard hovering in the sky over central Stockholm, and a large number of police cars and ambulances were dispatched to the scene, witnesses said.

Another section of Drottninggatan was also the scene of Sweden's only other terror attack, in 2010, when a suicide bomber blew himself up, killing himself and slightly injuring several others.

European politicians expressed solidarity, with European Commission President Jean-Claude Juncker saying that it was an "attack on us all."

A spokesman for German Chancellor Angela Merkel said: "Our thoughts go out to the people in Stockholm, to the injured, their relatives, rescuers and police.

"We stand together against terror."

The attack followed a string of similar massacres in Europe by people using vehicles as weapons.

The deadliest came last year in France on the Bastille Day national holiday of July 14, when a man rammed a truck into a crowd in the Mediterranean resort of Nice, killing 86 people.

Last month, Khalid Masood, a 52-year-old convert to Islam known to British security services, killed five people when he drove a car at high speed into pedestrians on London's Westminster Bridge before launching a frenzied knife attack on a policeman guarding the parliament building.

And in December, a man hijacked a truck and slammed into shoppers at a Christmas market in Berlin, killing 12 people.

In 2014, Daesh called for attacks on citizens of Western countries and gave instructions on how they could be carried out without military equipment, using rocks or knives, or by running people over in vehicles.