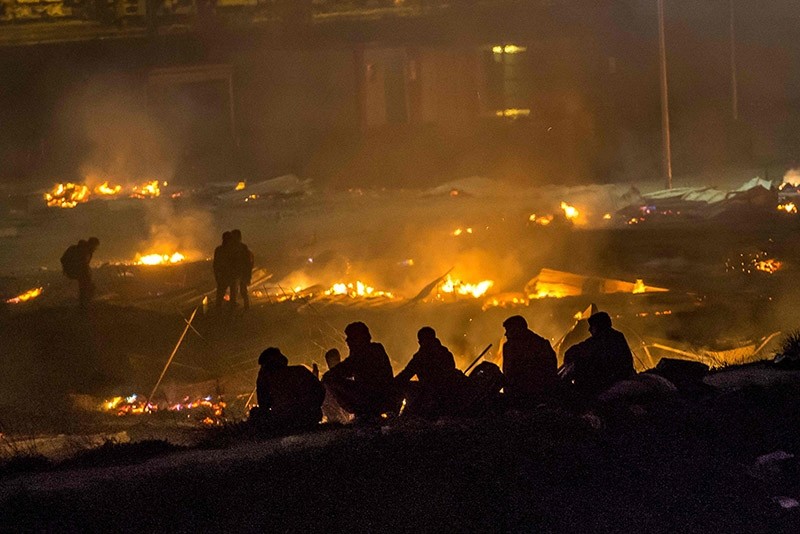 Migrants evacuate as a huge fire blazes through the Grande-Synthe migrant camp outside the northern French city of Dunkirk late April 10, 2017, reducing it to ,a heap of ashes,, the regional chief said. (AFP Photo)
by Compiled from Wire Services Apr 11, 2017 12:00 am

A huge fire, apparently started deliberately, tore through the Grande-Synthe migrant camp near the northern French city of Dunkirk late Monday, reducing it to "a heap of ashes", the regional chief said.

Firefighters said at least 10 people had been injured in the blaze at the camp, which was home to some 1,500 people, mostly Iraqi Kurds, living in closely packed wooden huts.

"There is nothing left but a heap of ashes," Michel Lalande, prefect of France's Nord region, told reporters at the scene as firefighters continued to battle the flames which were visible from several kilometres (miles) away.

"It will be impossible to put the huts back where they were before."

The fierce blaze destroyed most of the 300 huts in the camp and had still not been extinguished at 2:00 am Tuesday (0000 GMT).

The migrants were evacuated and would be rehoused in emergency accommodation, the prefect said, adding that the Dunkirk suburb of Grande-Synthe had already made two gymnasiums available.

Lalande said the blaze had been started after a fight on Monday afternoon between Afghans and Kurds at the camp that had left six injured with knife wounds.

"There must have been fires deliberately set in several different places, it is not possible otherwise. It seems that it is related to fights between Iraqis and Afghans," said Olivier Caremelle, chief of staff of Grande-Synthe mayor Damien Careme, an environmentalist who supported the building of the camp last year.

"What I can see for myself is that everything has burned down. There is a communal kitchen and the information point, but it's impossible to walk through the camp and get a really accurate idea of the extent of the damage," Caramelle said.

The camp in the Dunkirk suburb of Grande-Synthe was set up a year ago by Doctors Without Borders. The neat rows of wooden shelters replaced a squalid makeshift tent camp nearby rife with traffickers preying on migrants. Humanitarian groups said the original camp was filthier and more dangerous than a huge makeshift camp in Calais, about 30 kilometers to the west, that was dismantled by the state in October.

The population of the new Dunkirk camp swelled after the camp in Calais was torn down.

Clashes, as well as small fires, have occurred in the past in the La Liniere camp. French officials decided last month that the camp population must be reduced to 700 and security increased to keep out traffickers.

Authorities said the camp must be dismantled bit by bit with migrants housed in special centers, like the thousands of migrants evacuated from the Calais camp.