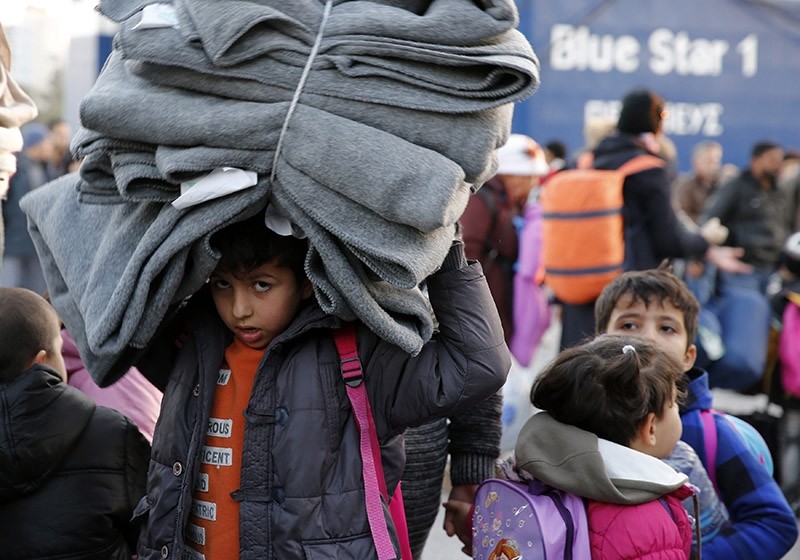 A migrant child carries blankets as refugees and migrants disembark from the passenger ferry Blue Star1 at the port of Piraeus, near Athens, Greece, January 31, 2016. (Reuters Photo)
by Compiled from Wire Services Apr 12, 2017 12:00 am

The European Commission called on Wednesday on member states to step up the protection of migrant children, especially those travelling on their own.

Currently, one in three asylum seekers in Europe is a child, and at risk of abuse, exploitation, going missing, and being drawn into criminal activities or radicalization, according to the commission.

The commission proposed a number of measures as a priority for member states, such as having child protection specialists involved from an early stage, as well as creating adequate reception conditions for children.

"Child migrants, especially those who are unaccompanied, should be supported by guardians or foster families, as early as possible," said Vera Jourova, the Commissioner for Justice, Consumers and Gender Equality.

Child protection groups welcomed the announcement from the European Commission and expressed hope the long-awaited measures would be carried out quickly.

More than 1.2 million new asylum requests were registered in EU countries last year, after nearly 1.26 million in 2015, according to official figures.

"We also have to avoid that children are drawn into criminal activities or radicalization."

The Commission, the executive of the 28-nation EU, said "everything must be done to provide alternatives to administrative detention for children."

Human Rights Watch reported in September that migrant children were being held in "deplorable" conditions for over a month on average, with some locked up in police cells alongside adults for lack of space.

The Commission called for deploying child protection officers at migrant reception centers in countries such as Greece and Italy, and for bolstering the role of guardians for unaccompanied minors.

EU figures show that of the overall arrivals, some 90,000 unaccompanied minors entered the bloc last year.

The Commission said all children should have immediate access to legal aid, health care, psychological support and education.

It also called on all member states to set up steps to systematically report and exchange information on all missing children.

The European police agency Europol caused a stir more than a year ago when it announced that some 10,000 migrant children had gone missing, raising alarm that many of them could have fallen into the hands of traffickers for labor, sexual or criminal exploitation.

The Commission called for accelerated efforts to trace the relatives of children and reunite them with their families, both inside and outside the EU.

Avramopoulos said he hoped member states would endorse the actions in the next few months.

Child protection groups like UNICEF, Save the Children and Missing Children Europe as well as the refugee agency UNHCR, all welcomed the new EU measures and hoped for quick implementation.