Hundreds rescued from the Mediterranean, at least 6 dead: aid organizations 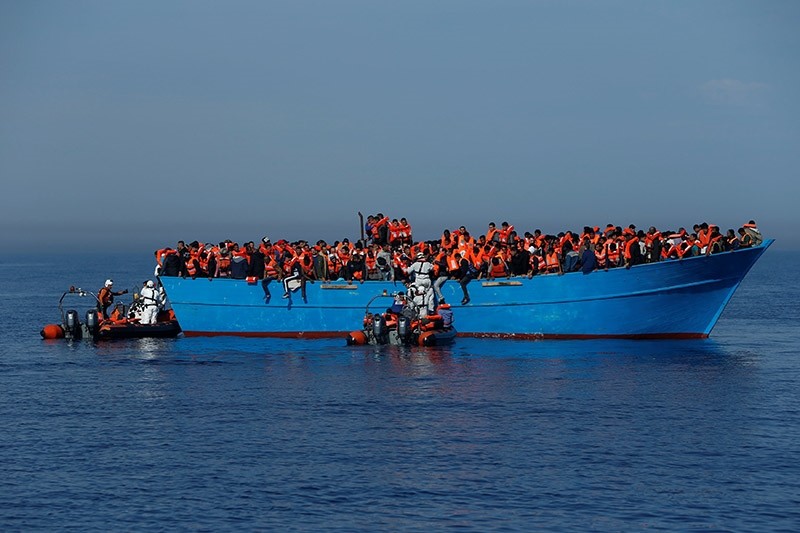 Migrants on a wooden boat are rescued by the Malta-based NGO Migrant Offshore Aid Station (MOAS) in the central Mediterranean in international waters off the coast of Sabratha in Libya, April 15, 2017. (Reuters Photo)
by Apr 15, 2017 12:00 am

Hundreds of migrants were rescued from the Mediterranean, aid organizations reported on Saturday, stating that at least six people had died.

The Greek coastguard on Saturday discovered a boat in distress carrying around 40 migrants, including 13 children, between Greece and Italy. According to Greek radio station ERT, the boat was found a few nautical miles to the west of Cephalonia island in the Ionian Sea.

Some of the children were suffering from severe dehydration, and required urgent medical attention, according to the coastguard. The boat was due to arrive in the port city of Argostoli in the early evening.

On Friday, the organization SOS Mediterranee said it rescued 500 people within seven hours. One man was found dead on one of the rafts.

A spokesman for the International Organization for Migration (IOM) stated in a tweet on Saturday that 101 migrants were rescued from a sinking boot by fishermen, while five migrants drowned. When the rescue took place was unclear.

According to IOM, so far this year nearly 800 migrants have died trying to cross the Mediterranean in the often unseaworthy vessels provided by human traffickers.

On Thursday, 23 people were rescued when a boat sank near the Libyan coast. Some 97 migrants are missing in that incident.