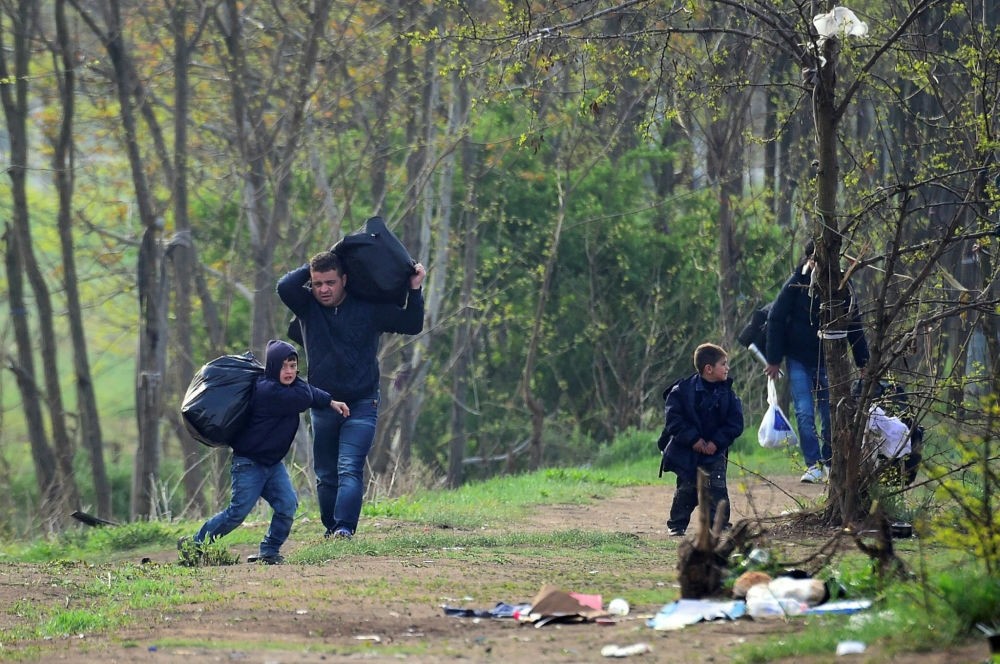 A Syrian family carry their belongings through the forest near the Hungarian border fence at the Tompa border station transit zone on April 6. (AFP Photo)
by Compiled from Wire Services Apr 15, 2017 12:00 am

Poland is working on regulations that would allow it to detain asylum seekers in border camps, arguing such a policy has served Hungary well despite being criticized by the U.N.

The Polish government is planning to create container camps for asylum-seekers, with the interior minister saying Thursday that a similar system is working well in Hungary.

Such container camps would most likely be placed on the border with Belarus, where people from Chechnya and elsewhere — many of whom are victims of political repression — regularly try to enter Poland in the hope of seeking asylum.

The Helsinski Foundation for Human Rights in Warsaw said it would be harmful to detain people, especially families with children, under such conditions. The foundation also argued the step was unnecessary because Poland is not facing a major influx of migrants, with only about 1,200 asylum applications submitted last year.

The Gazeta Wyborcza daily reported that the plan for detaining asylum seeks involves putting them in containers behind barbed wire.

"If there is an emergency situation, we must be prepared for all scenarios," Interior Minister Mariusz Blaszczak said Thursday on Radio Zet.

Poland remains opposed to accepting Muslims, which the government considers a threat to the nation's Catholic culture. Poland, Hungary and other central European EU member states are opposed to an European Commission plan to distribute migrants from Africa and the Middle East across the bloc.

Both Poland and Hungary have faced criticism for refusing to accept any of the hundreds of thousands of migrants who arrived in Europe in 2015.

But unlike Hungary, Poland - a country which issued over a million work permits for neighboring Ukrainians last year - has not seen thousands of migrants from Africa and Middle East storm its borders.

Hungary, one of the focal points of Europe's migration crisis since 2015, last month approved a law to detain migrants in border camps, a step which the United Nations said violated EU law and would have a "terrible physical and psychological impact" on asylum seekers.

The migrants' camps are made out of scrapped shipping containers, an extremely cheap and innovative construction material. Hungary is also building four small military bases along the fence to provide accommodations for some of the 3,000 soldiers on border duty along with police. The barracks are being built out of shipping containers as well and each base will have room for 150 people.

Prime Minister Viktor Orban has called mass migration a threat to Europe's socioeconomic make-up and a "Trojan horse for terrorism" and Hungary has been a focal point for Europe's migration crisis since 2015.

Orban has also argued that allowing in so many Muslims risks undermining Europe's liberal democratic values and its Christian traditions, which are not being shared by the majorities of the new arrivals.

The migrant relocation plan was decided by EU leaders in September 2015 despite Hungary, the Czech Republic, Slovakia and Romania voting against it. Although generally opposed to it, Poland's previous centrist government voted with majority. Last Wednesday, the EU executive arm stepped up pressure on Poland and Hungary to take in asylum seekers under the bloc's plan.
RELATED TOPICS