British PM May to hold snap polls in June amid 'division,' 'political game-playing' 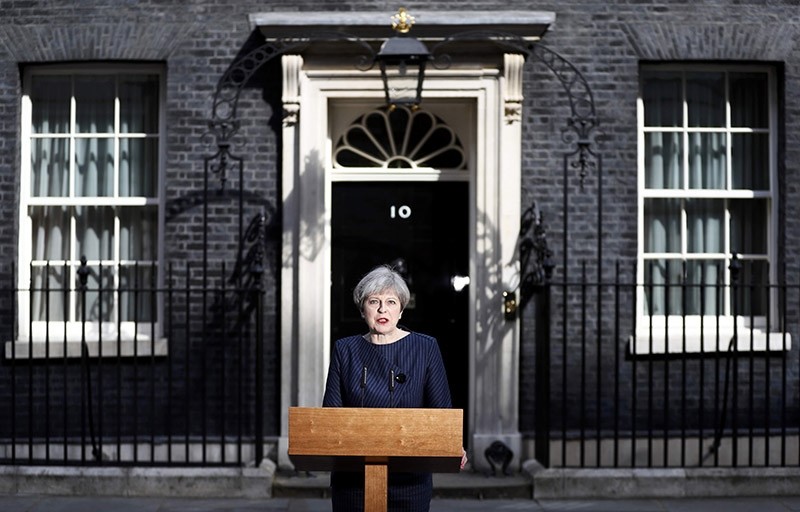 Britain's Prime Minister Theresa May speaks to the media outside 10 Downing Street, in central London, Britain April 18, 2017 (Reuters Photo)
by Compiled from Wire Services Apr 18, 2017 12:00 am

In a shock announcement, Prime Minister Theresa May called for an early general election to be held June 8 to seek a strong mandate as she negotiates Britain's exit from the European Union

As Britain prepares for delicate negotiations on leaving the European Union, British Prime Minister Theresa May called yesterday for an early election on June 8, saying she needed to strengthen her hand in divorce talks with the European Union by shoring up support for her Brexit plan.

Just two years after the last vote and three years before the next scheduled date in May 2020, May asked the House of Commons to back her call for an election while standing outside 10 Downing Street. Under Britain's Fixed-Term Parliaments Act, elections are held every five years, but the prime minister can call a snap election if two-thirds of lawmakers vote for it. May triggered a two-year countdown to Britain's exit from the EU last month, and negotiations to settle divorce terms and agree on a new relationship are expected to start within weeks.

She said that since Britons voted to leave the EU in June, the country had come together, but politicians had not. She said the political divisions "risk our ability to make a success of Brexit."

At present, May's governing Conservatives have a small majority, with 330 seats in the 650-seat House of Commons. May said that "our opponents believe that because the government's majority is so small, our resolve will weaken and that they can force us to change course" on leaving the EU.

"They are wrong," she said. "They underestimate our determination to get the job done and I am not prepared to let them endanger the security of millions of working people across the country."

Britain's largest opposition party, Labour, welcomed Prime Minister Theresa May's plan to hold a general election on June 8. "I welcome the prime minister's decision to give the British people the chance to vote for a government that will put the interests of the majority first," Labor leader Jeremy Corbyn said. Corbyn's approval of the plan means May's motion to parliament led the way to achieve its required two-thirds majority comfortably in Wednesday's vote.

"Labour will be offering the country an effective alternative to a government that has failed to rebuild the economy, delivered falling living standards and damaging cuts to our schools and NHS (national health service)," Corbyn said. "We look forward to showing how Labour will stand up for the people of Britain."

The dramatic announcement caps nearly a year of tumult in British politics following the Brexit vote in June 2016 that included the resignation of May's predecessor David Cameron and her rapid rise to power last year.

A round of opinion polls over the Easter weekend also showed her Conservative Party far ahead of the main opposition Labour Party.

The Conservatives polled at between 38 percent and 46 percent, with Labour at 23 percent to 29 percent, according to the polls by YouGov, ComRes and Opinium.

The poll lead had prompted many senior Conservatives to call for an election, particularly as May will need a strong parliamentary majority as she seeks to negotiate Brexit.

The Conservatives currently have a majority of just 17 from the last election in 2015 and some of their deputies have indicated they could vote against the government on key aspects of Brexit legislation.