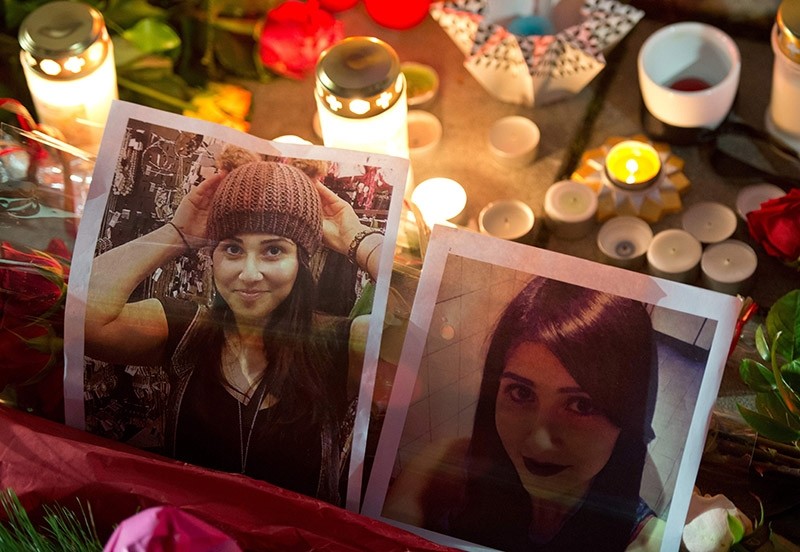 This file photo taken on November 28, 2014 shows candles placed by mourners around pictures of Tuu011fu00e7e Albayrak in front of a hospital in Offenbach, western Germany, where the young woman was getting medical treatment and where she died. (AFP Photo)
by Compiled from Wire Services Apr 20, 2017 12:00 am

Germany has deported a 22-year-old Serbian man convicted of killing a Turkish-German woman after she confronted him for harassing two young women at a McDonald's in a case that drew international attention.

Student Tuğçe Albayrak was hailed as a heroine after she intervened to protect two 14-year-old girls in the altercation, but her civic courage cost the 22-year-old her life when Serbian national Sanel Masovic slapped her to the ground in the restaurant carpark, causing severe head injuries.

Albayrak died in a coma on her 23rd birthday, days after the attack. More than 1,000 mourners attended her funeral, amid a wave of sympathy for her.

Masovic, 18 at the time of the attack, served two and a half years in jail for inflicting bodily harm with fatal consequences.

On Thursday, he was deported to Serbia from Frankfurt airport, said the city administration of nearby Wiesbaden.

A court in Hesse state had in March upheld a decision by immigration authorities last September to expel and bar him from Germany for eight years.

The court ruled that Masovic still represented a threat to public safety and could be expected to act "aggressively and violently" in conflict situations.

In the trial, presiding judge Jens Assling had said Masovic did not intend to kill Albayrak, but added that "no verdict in the world could in any way make up for the loss" to her family.

The attack was captured on a surveillance video later broadcast on national media, drawing a wave of shock and revulsion.

"I am deeply sorry for what I did," Masovic told the juvenile district court at the start of his trial.

"I can't imagine the pain and suffering I inflicted on her family. I never thought she would die."