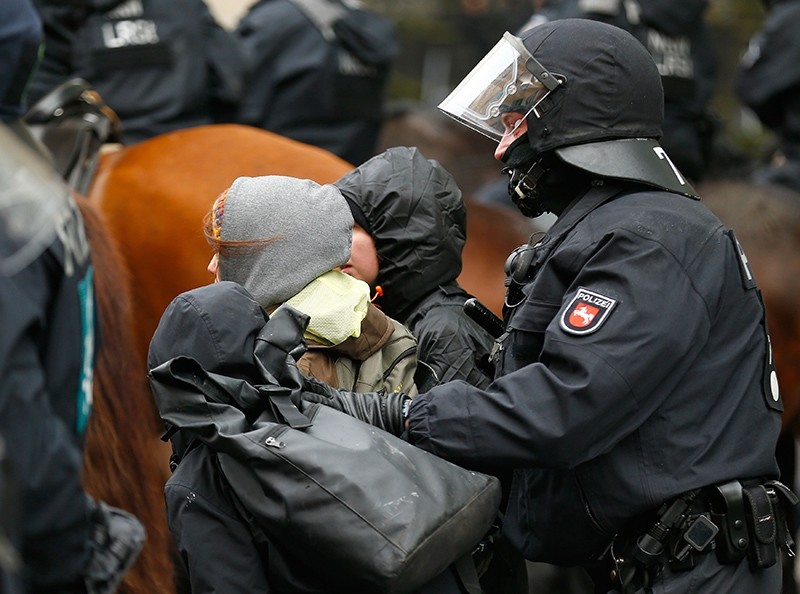 Police arrest activists during a demonstration against Germany's anti-immigration party Alternative for Germany (AFD) before the AFD's party congress in Cologne, Germany, April 22, 2017 (Reuters Photo)
by Compiled from Wire Services Apr 22, 2017 12:00 am

Around 50,000 left-wing protesters are expected and about 4,000 police officers are on the ground in Cologne to prevent a violent escalation of anti-populist rallies.

The convention takes place days after AfD's co-leader Frauke Petry, who is Germany's best-known nationalist politician, said that she won't be her party's top candidate in the September general election, a decision that appears to reflect a growing split among its leading figures.

But as the 600 delegates began filing into the congress venue, a hotel in the city centre, singing and chanting demonstrators attempted to block them from passing through security barricades, leading to scuffles with authorities.

One police officer escorting party members into the suffered an injury to his face, leading to the arrest of a male protester.

The AfD, now represented in 11 of Germany's 16 states, aims to sign off on a programme for its campaign that it hopes will pave the way for the party to enter the national parliament for the first time in its four-year history.

After weeks of bitter infighting, co-leader Frauke Petry made the shock announcement Wednesday that she would not seek to lead the AfD's campaign. The news left the party reeling and set the stage for a showdown between populist and more radical, hard-right forces.

"(Petry) has been unable to stop the AfD, which began as a party of euro critics, from becoming more and more a catch-all for racists, right-wing nationalists and the far right," Cologne's daily Stadt-Anzeiger said.

"The fight within the AfD rages on."

Founded in 2013 on a eurosceptic platform, the AfD seized on Chancellor Angela Merkel's decision to let in more than one million asylum seekers since 2015, transforming the German political landscape.

But its fortunes have declined as the number of new arrivals has dwindled, and all of Germany's mainstream parties have ruled out working with it should it clear the five-percent hurdle to representation in the September 24 election.

Opinion polls show the AfD at between seven and 11 percent, a steep drop from the 15 percent support it drew only late last year.

Merkel is seeking a fourth term after nearly 12 years in power and her conservative Christian Democrats are currently leading the polls.

The telegenic Petry, a 41-year-old trained chemist who is pregnant with her fifth child, has aligned herself with kindred spirits across Europe, including far-right firebrand Marine Le Pen, one of the frontrunners for the first round of French elections Sunday.

But given the long shadow still cast by Germany's Nazi past, Petry has argued the AfD must make itself more palatable with a more moderate-sounding "middle-class" platform she will put to a vote at the congress.

The stated goal is to become Germany's ruling party by 2021.

Denouncing "provocations" by party officials, Petry has called for the ouster of an AfD state leader, Bjoern Hoecke, who in January sparked outrage by slamming Berlin's vast Holocaust memorial as a "monument of shame".

Although Hoecke has been barred from attending the congress, some delegates have said they will put forward a motion to keep him in the party.

Petry's chief rival, 76-year-old Alexander Gauland, a hardline defector from Merkel's CDU, has said he would back the initiative.

Analysts say the vast majority of the AfD's core supporters are far to the right of the political spectrum.

However they say there is little appetite among most German voters for radical change, particularly after the victories of Donald Trump in the United States and the Brexit camp in Britain.

"In terms of its voters, Petry's attempt to make the AfD a middle-class mainstream party is a very unrealistic strategy," Robert Vehrkamp of the Bertelsmann Foundation think tank told Spiegel Online.

The news website said the party's inner turmoil also diminished the threat it posed to the establishment in Europe's top economy.

"While in the rest of Europe, opponents of immigration and the EU are on the march, the AfD is busy tearing itself apart," it said.

"That is good news for the traditional parties and the defenders of liberal values in Germany -- at least in its current state, no one needs to fear the AfD."