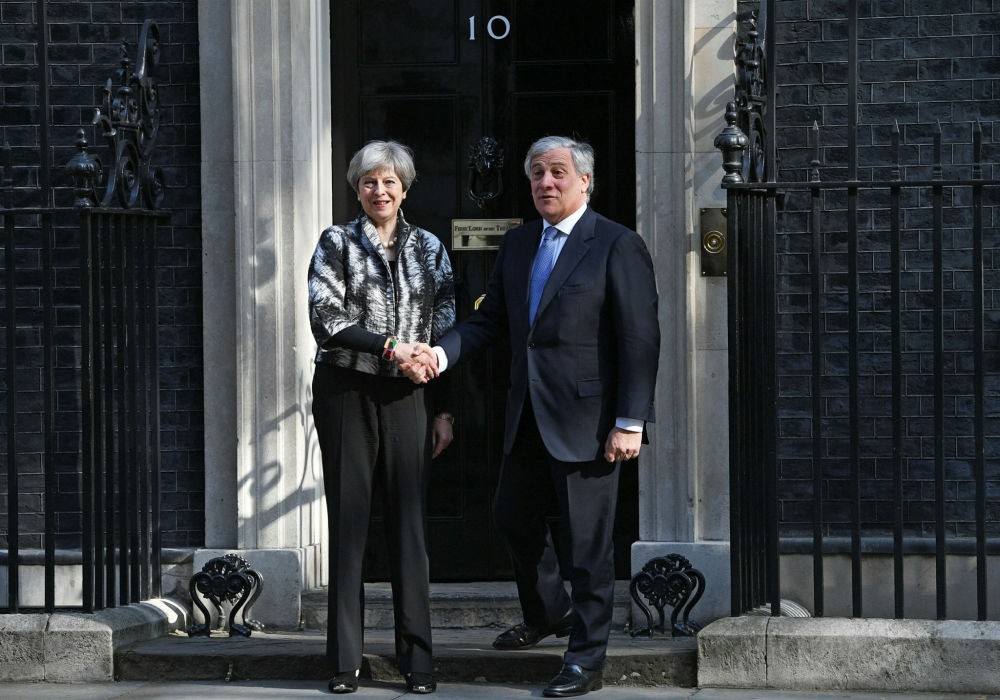 British Prime Minister Theresa May greets the President of the European Parliament Antonio Tajani on the steps of 10 Downing Street in London, Britain, April 20.
by French Press Agency - AFP Apr 22, 2017 12:00 am
Britain's snap election has sparked hopes in Europe that Brexit negotiations could run more smoothly with a leader who has a big mandate, analysts and diplomats say.

In Brussels, the belief is that if Prime Minister Theresa May wins a large majority as expected on June 8, she will no longer have to worry so much about upsetting hardliners in her Conservative Party.

That would give her space to consider options that are anathema to core Brexiteers, such as a transitional deal until 2022 in which free movement and the jurisdiction of the European Court of Justice could continue.

European Parliament President Antonio Tajani said as much when he visited May in London on Thursday, adding that a new government before talks start later in June is "good not only for the UK but for us."

That view is widely shared. A European source close to the negotiations told AFP that a May victory would give "a strong leader in London who could negotiate with us, with the strong support of her electorate".

The current mood is more promising than when May formally triggered the two-year Brexit process last month, a step that saw both sides taking tough positions on the talks ahead.

London and Brussels have been at odds on whether talks on the divorce arrangements, including costs, should take place at the same time as negotiations for a trade deal between post-Brexit Britain and the EU.

Former PM David Cameron resigned after last June's shock Brexit referendum result. May is not only keen to win her own mandate but also to be less at the mercy of her party's anti-E.U. faction when it comes to parliamentary votes.

"The good news, from a European point of view, is that she would be less fragile for all the concessions that she is going to have to make," another European diplomatic source said.

Whereas earlier this year May said Britain was ready to walk away and that no deal was better than a bad deal, she is now talking in terms of the "the best deal possible."

Simon Tilford of the Centre for European Reform predicted that, despite the divisive nature of the Brexit referendum, May would win a massive majority of 130-150 seats because of the opposition Labor party's weakness.

If so the "positive scenario is that she wants that [a majority] so she's not vulnerable to attacks from the eurosceptics" Tilford told AFP.

May has so far insisted that Brexit means tougher immigration rules, including ending free movement of EU citizens, and of a complete break from any kind of power of the EU's Luxembourg-based top court.