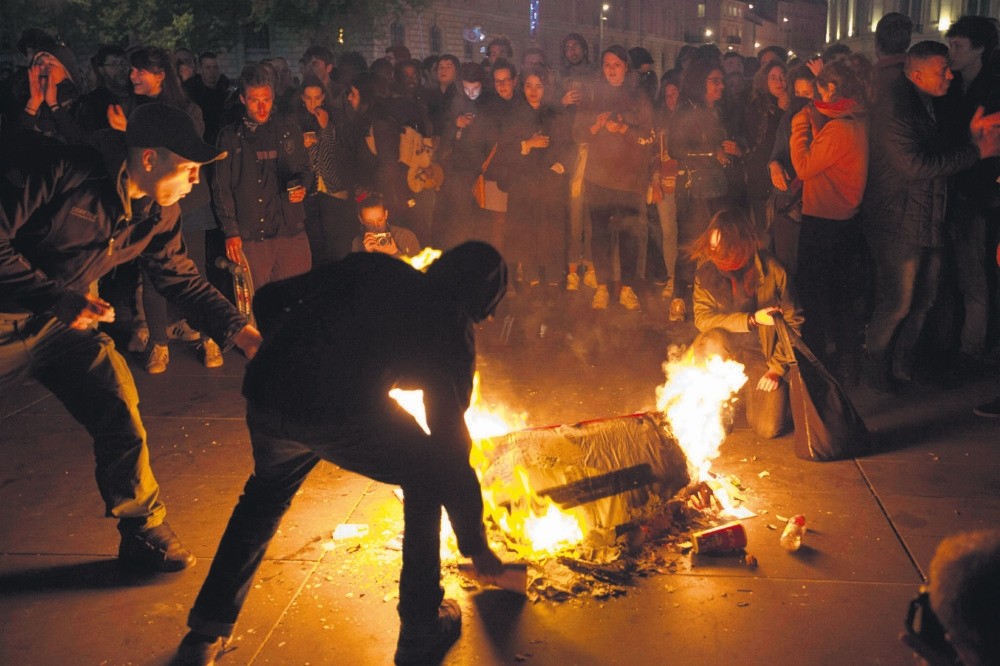 More than 100 were arrested on election night in Paris alone. The rioters were hurling bottles and other objects at police officers, torching cars, vandalizing public property as well as private in addition to looting stores.

In central Paris, six police officers and three protesters were slightly injured in the riots. An additional 143 were arrested, 29 of which were held overnight.

Hundreds, mainly youth, many from immigrant backgrounds, gathered to protest against nationalist leader Marine Le Pen. She was not alone in being protested against however, as the leftist candidate Emmanuel Macron got his own fair share of counter-protesters. Some demonstrators in Paris danced around a bonfire, chanting "No Marine and no Macron."

Several so-called "anti-fascist, anti-capitalist" demonstrations were held all across France, more specifically in sizable cities such as Lyon, Bordeaux, Nantes and Rennes.

These small percentage differences might not pay a big role in the upcoming May 7 second and final round of the election however, for which a simple lead is required to win the Palais de l'Élysée, as one candidate, François Fillon, who got under 20 percent, urged his base to support Macron instead, which would make things very difficult for Le Pen.

Speaking numerically, it is not probable that the anti-globalist, Eurosceptic Le Pen will ultimately succeed in winning the French presidency, but even so, the true winners of this election will be the radicals like Le Pen and communist-leaning, Eurosceptic Jean-Luc Mélenchon, who've both managed to get almost unprecedented support for their movements. Le Pen has managed to double support for her part. The political system in France is unlike that in the United States. Unlike Hillary Clinton who lost in 2016, Le Pen and Mélenchon won't disappear into the shadows, but if problems with immigration and the European Union persist, then these parties will come back, making the center virtually irrelevant.

Effectively, the far-left and the far-right continue to gain strength while centrists continually lose it, as is apparent with the results of parties like François Hollande's Socialist Party. The French president did not even attempt to re-run due to his abhorrent approval ratings.

The rise of the radicals is an effect of the European Union's very poor recovery rates from the 2008 recession, as well as the inability of EU leaders to tackle the mass immigration crisis properly, which has led Europeans to become increasingly Eurosceptic as well as resistant to mass immigration. France is in particular bearing most of the weight of the negative consequences of mass immigration, as is apparent by frequent anti-police riots in urban areas with immigrant backgrounds, as well as the fact that a lot of the terrorists in attacks over the past two years, which have left hundreds dead and thousands injured, managed to infiltrate Europe, posing as asylum seekers, via the on-going waves of uncontrolled, mass immigration.

To put this into perspective, the Royal Institute of Foreign Affairs published a study in February which had over 10,000 respondents, equally chosen from 10 European countries. "Overall, across all 10 of the European countries an average of 55 percent agreed that all further migration from mainly Muslim countries should be stopped, 25 percent neither agreed nor disagreed and 20 percent disagreed." the report found.

Furthermore, "In no country did the percentage that disagreed surpass 32 percent."
RELATED TOPICS