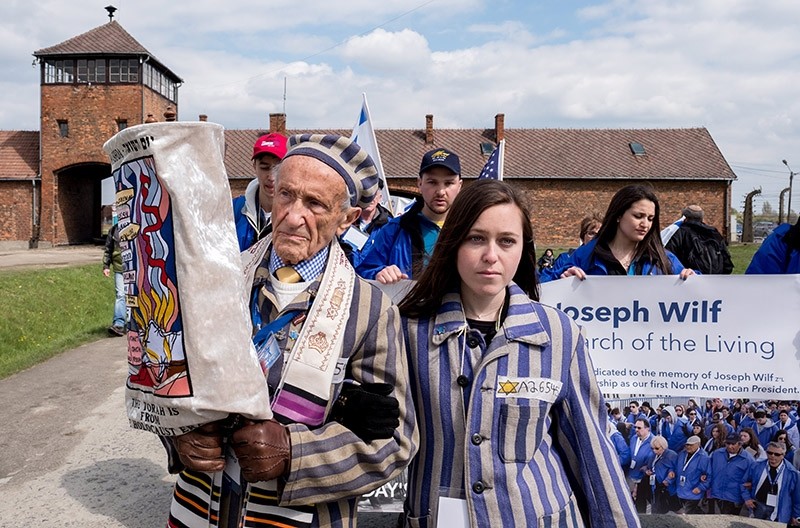 Former prisoner Edward Mosberg (L) and his granddaughter Jordana Karger (R) participate in the 26th u2018 March of the Living u2018 at the former Nazi concentration death camp Auschwitz II Birkenau in Oswiecim, Poland, 24 April 2017. (EPA Photo)
by Daily Sabah Apr 25, 2017 12:00 am

Jewish people living in Germany face a growing threat of anti-Semitism, including hostility and verbal attacks, a new report has suggested.

The report published Monday, which was prepared by an independent commission assigned by the German parliament, said that German Jews perceived anti-Semitism as an "everyday" issue.

The experts explained that one reason for this perception was the growing impact of social media, through which anti-Semitic hate speech could easily be spread.

According to the Center for Antisemitism Research in Berlin, attacks via social media are generally not reported to authorities.

Experts, who presented the report to the German parliament Monday, called for improved recording in nationwide databases and for the punishment of anti-Semitic offenses, as well as for better counseling options for victims.

The experts also demanded the appointment of an anti-Semitism officer. The authors of the report emphasized that anti-Semitism in Germany was a macrosocial problem.

German anti-Semitic attitudes that Jewish people have "too much influence" declined to about five percent in the past 15 years compared to 9 percent in 2002, however forms of Israel-based anti-Semitism were met with approval by 40 percent of the survey participants in 2016.

Petra Pau, who is a politician from the left wing Die Linke party and one of the rapporteurs, said that Israel-based anti-Semitism was considered "acceptable" in Germany.

A coherent approach to the fight anti-Semitism is lacking, report coordinator Patrick Siegele said. There are very few preventive and educational programs in Germany that deal explicitly with the topic of anti-Semitism.

The experts also stressed that anti-Semitism should be considered a current problem, adding that too little is being done in adult education regarding this issue.

The report is expected to be further discussed in parliament before the upcoming elections in September.