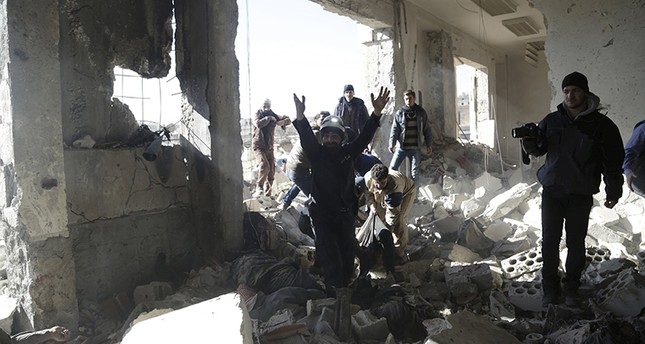 French intelligence services have concluded that forces loyal to Assad regime carried out a sarin nerve gas attack on April 4 in northern Syria and that Assad or his closest entourage ordered the strike, a declassified report showed.

The attack in the town of Khan Sheikhoun killed scores of people and prompted the United States to launch a cruise missile strike on an Assad air base in response, its first direct assault on the regime in the conflict.

The six-page document - drawn up by France's military and foreign intelligence services and seen by said it was able to reach its conclusion based on samples they had obtained from the impact strike on the ground, and a blood sample from a victim.

Among the elements found in the samples were hexamine, a hallmark of sarin produced by the Assad regime.

"The French intelligence services consider that only Assad and some of his most influential entourage can give the order to use chemical weapons," the report said.

It added that terrorist groups in the area did not have the capacity to develop and launch such an attack and that Daesh was not in the region.

Assad's claim to AFP news agency on April 13 that the attack was fabricated, was "not credible" given the mass flows of casualties in a short space of time arriving in Syrian and Turkish hospitals as well as the sheer quantity of online activity showing people with neurotoxic symptoms, said the report

Share on Facebook Share on Twitter
Previous in Europe The Paris prosecutors' office has announced 10 arrests in an investigation... Next in Europe Europe is becoming a global hub for child pornography, according to...
DAILY SABAH RECOMMENDS