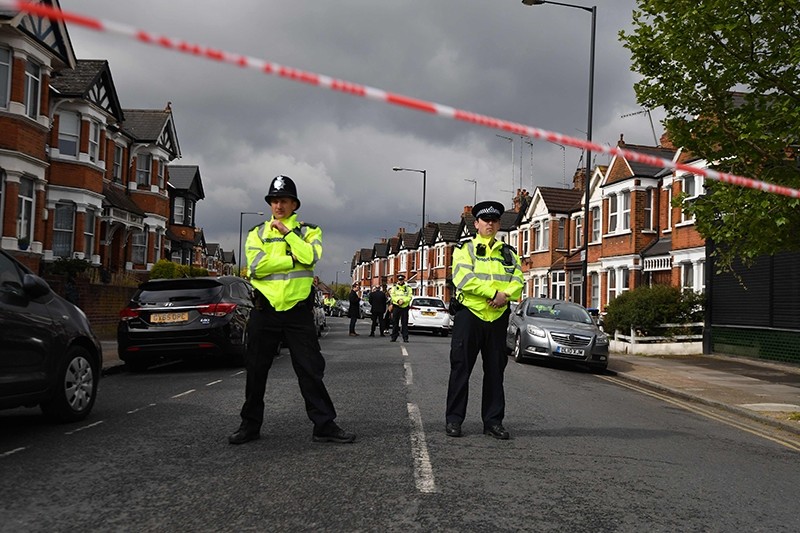 British police officers secure a cordon in a residential street in north-west London on April 28, 2017 where firearms officers shot a female subject after they carried out a specialist entry into an address. (AFP Photo)
by Compiled from Wire Services May 01, 2017 12:00 am

Three young women were arrested under anti-terrorism laws in east London on Monday in connection with a security operation in the capital last week, police said.

The two 18-year-old and one 19-year-old women were held on suspicion of the commission, preparation and instigation of terrorist acts, the Metropolitan Police force said .

"The arrests were made as part of an ongoing intelligence-led operation in connection with an address on Harlesden Road," the police said in a statement, referring to the location of a raid by armed counter-terrorism officers in northwest London on Thursday evening.

Police at the time said that raid had disrupted an active militant plot.

Monday's arrests came days after a man was arrested carrying knives near Prime Minister Theresa May's office in Westminster, and just over a month after a British-born convert to Islam ploughed a car into pedestrians on Westminster Bridge.

On Thursday, armed counter-terrorism officers using tear gas stormed the house in the Willesden area of the capital and shot a woman in her 20s.

She was released from hosital on Sunday, then herself arrested on suspicion of committing terror offences.

So far, a total of 10 people have been arrested as part of the investigation. None have yet been charged or identified.

Britain has been on its second-highest alert level of "severe" since August 2014, meaning an attack by militants is considered highly likely.