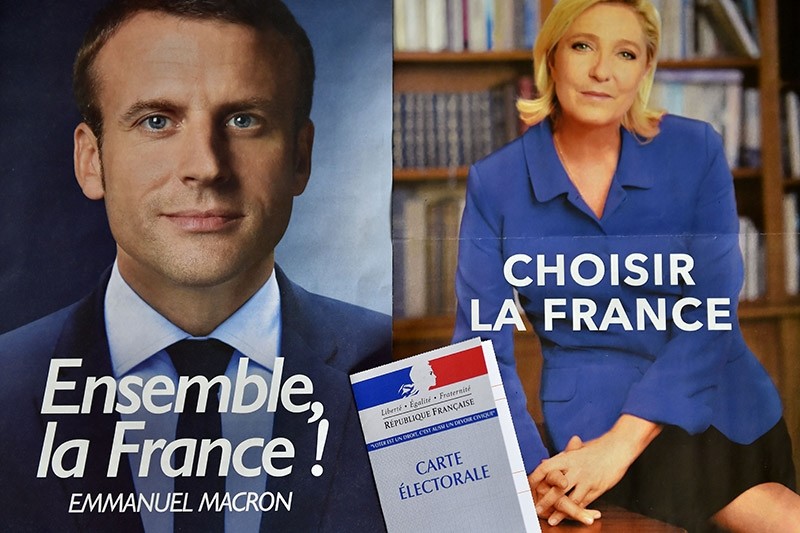 A picture taken on May 4, 2017 shows a voter ID displayed on top of campaign flyers of French presidential candidates Emmanuel Macron and Marine Le Pen in Nantes on May 4, 2017 ahead of the 2nd round of the presidential election on May 7. (AFP Photo)
by Associated Press
May 04, 2017 12:00 am

After an election campaign like no other, France is about to have a president like no other: either Marine Le Pen, a far-right populist who could reshape Europe's post-war order and become France's first female leader, or Emmanuel Macron, a brainy upstart who's daring the French to gamble on a startup-style new political construction.

The outcome of Sunday's presidential runoff hinges on the millions of voters repelled by them both, who must make a choice — whether to hand Macron his expected victory, or stay home and risk handing Le Pen a surprise win. That choice will ripple across Europe's open borders, through global financial markets, across the battlefields of Syria and Ukraine and the around the halls of U.N. diplomacy.

Gone are the French version of the Republicans and Democrats — the two parties that steered post-war France but failed to adapt it for the 21st century. Both the Republicans and the Socialists were tossed out by voters in last week's first-round presidential election as symbols of a stale left-right system, discredited in a world where multinational trade and extremist violence seem to trump political ideology.

What's left are two starkly different choices: a progressive European or an anti-immigration nationalist. A tightly-buttoned former banker or a savvy lawyer who knows how to speak to the struggling working class. A man who wants to unite the French and their European colleagues or a woman who sees this vote as a "choice of civilizations" between France and Islam, and whose inner circle is poisoned by racism.

Can she really win?

Macron is the man to beat, especially after he proved his presidential mettle in Wednesday's debate with Le Pen, rising above her low blows and showing voters that he might, after all, ably lead this nuclear-armed nation and stand up to Donald Trump or Vladimir Putin.

Pollsters, bookmakers and financial traders calculate that Le Pen would have to accomplish a miracle to overcome an estimated 20-point poll gap.

But after Britons chose Brexit and Americans chose Trump, no one can be sure what will happen Sunday, when France's 47 million voters cast ballots from the beaches of Tahiti to the farms of Brittany and the cobblestoned streets of Paris.

Macron even tweeted a video Thursday warning: "The worst is not impossible."

The big question is how many of his detractors will hold their noses and choose Macron just to keep Le Pen's far-right National Front party out of power.

Many on the left see Macron as a puppet of the financial elite, and many on the right see him as a repackaged version of his former boss, the unpopular Socialist President Hollande. If enough of those voters stay home on election day, that might put Le Pen in the Elysee Palace.

The entire campaign has been a referendum on Le Pen — her plans to close French borders, use francs instead of euros, rethink France's role in the EU, ally with Putin's Russia and Assad's Syria and drastically curtail immigration.

One of its many surprises: For the first time in modern France, the incumbent refused to seek re-election. Hollande feared his single-digit approval ratings would hurt his Socialist Party's chances of keeping the presidency. The party went into a freefall anyway, and its candidate flopped.

Another surprise: The conservative Republicans, after relishing the likely prospect of retaking the Elysee Palace this year, melted down. Presumptive nominee Alain Juppe lost the party primary to harder-line Francois Fillon. Then Fillon went from front-runner to has-been over a whirlwind few days, thanks to a newspaper's allegations that he used taxpayer money to pay his wife and kids for jobs they never did. Fillon's denials of wrongdoing were drowned out by public outrage — and he's facing charges of embezzlement.

There was also the spectacular demise of former conservative President Nicolas Sarkozy's candidacy, and a late surge in support for far-left Jean-Luc Melenchon — both signs of voter disgust with the old regime.

And then there's Macron himself, who popped up with a vague political movement a year ago seen as a wild card bid for the presidency. With rivals on the left and right knocked out, Macron is now the only alternative to Le Pen still standing.

The final countdown and what 's next

Macron's final campaign stretch got off to a shaky start, as Le Pen undercut his visit to a Whirlpool factory slated to send its jobs to Poland. But he took the moral high ground at wartime memorial sites, reminding voters that Le Pen's father has downplayed the Holocaust and France's shameful Nazi collaboration.

The climax of the campaign may have been Wednesday's debate, when 15 million French tuned in to see if Le Pen would crush Macron alive. She didn't.

While a Macron presidency looks increasingly likely, it would not be easy.

He would need all his youthful energy and optimism to heal a deeply divided France, with Le Pen in place as a formidable political opponent. He would need to assemble a parliamentary majority from the remains of the left and right in legislative elections just a month away. And he would face tenacious union resistance to his plans to overhaul France's labor rules and create elusive jobs.

France would remain in a state of emergency, girding against Islamic extremist attacks, and the European Union would still face the deep-seated problems that fueled Brexit and populism in the first place.

Voting starts in French overseas territories Saturday then moves to the mainland Sunday, with 50,000 security forces on guard. Polling agency projections of the outcome are expected as soon as the final voting stations close Sunday at 8 p.m., followed by official results.