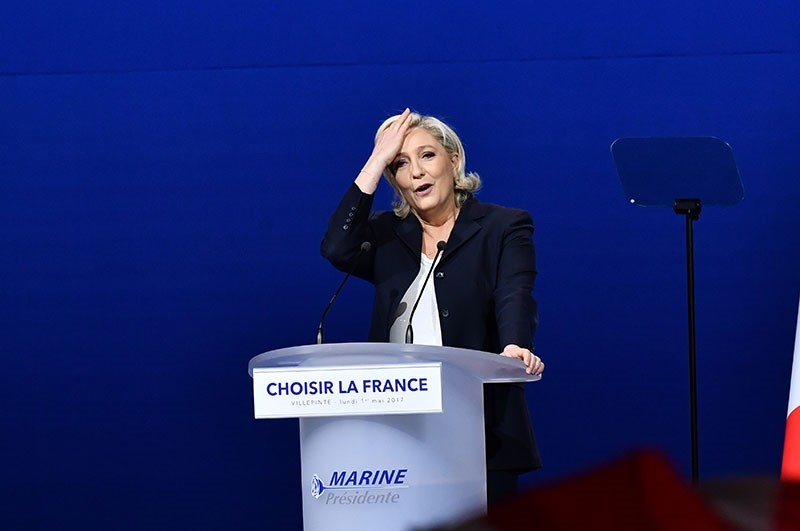 French far-right presidential candidate Marine Le Pen delivers her speech during a meeting, Monday May 1, 2017, in Villepinte, outside Paris. (AA Photo)
by Compiled from Wire Services May 04, 2017 12:00 am

Luis Aliot, vice president of Front National, justified the decision to exclude some media outlets May 2, claiming that Mediapart and Quotidien did not aim at democratic discussion but were conducting spying activities: "They are carrying out spying, one can call that like this." Aliot argued in favor of sorting out journalists in advance. The meeting on Monday was followed by 36 media companies in total.

Speaking to AFP a journalist of Quoditien, complained that Wallerand de Saint Just, treasurer of the FN, announced to her in September 2016 that she would not be accredited during the election campaign. On April 27, journalists from around 36 media outlets had already signed a petition denouncing the demeanor of the FN, calling it a "constraint against the freedom to carry out or job and fulfill our duty to inform", also naming AFP, Radio France, RFI, France 24, Le Monde, Libération et Marianne alongside Quotidien and Mediapart as victims of the FN's exclusive information policies. FN proceedings during the past week apparently reconfirm these practices.

Mediapart and Quotidien have experienced similar difficulties before and claim to be systematically excluded from FN events, with one Quotidien journalist even being forcefully expulsed from a Le Pen meeting in Lyon on February 1. Both media outlets are known for their critical stance towards the Front National and Marine Le Pen. Mediapart offers an extensive press pack on the FN, covering topics such as its organizational structure, finances, national and international networks, cadres and its political program.

As the French presidential election campaign enters its second round, Le Pen and Nicolas Dupont-Aignan held their first joint meeting on Monday in Parc des Expositions de Villepinte, a large convention center in Paris. Le Pen had only recently announced that in case she was elected as France's new president, Nicolas Dupont-Aignan, MP for the French right-wing party Debout la France, would be made prime minister. Two media organizations that wanted to cover the first public appearance of both candidates were denied accreditation.