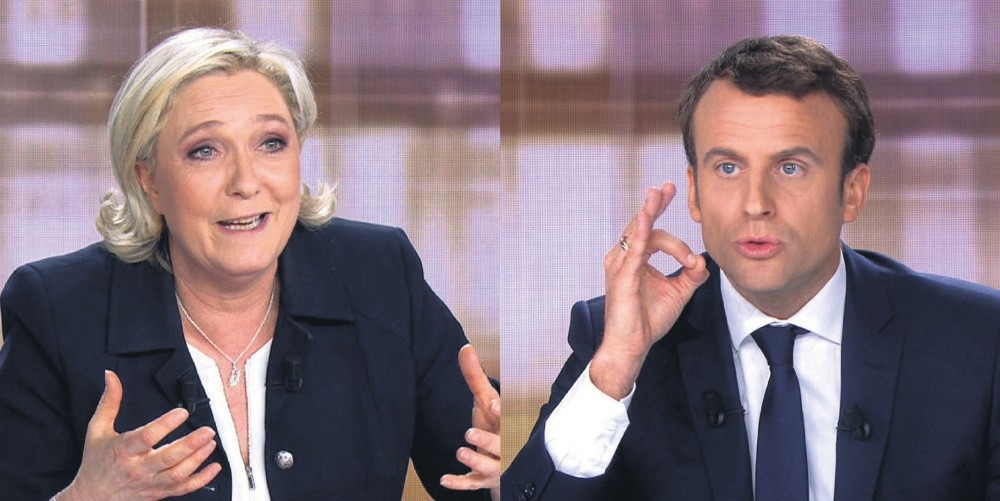 Ahead of this weekend's presidential face off, far-right candidate Marine Le Pen accused her centrist rival Macron of being German Chancellor Merkel's lapdog, saying that France will be led by herself or Merkel

In Wednesday's hot-tempered debate that was watched by 16.5 million people, far-right candidate Marine Le Pen described her centrist rival Emmanuel Macron as the "darling of the system," claiming that if she lost the elections, France would be led by German Chancellor Angela Merkel.

As the two candidates battled it out on live TV one last time before Sunday's election, Le Pen accused Macron of being "submissive" towards German Chancellor Angela Merkel, saying, "France will be led by a woman, either me or Mrs. Merkel."

Criticizing the EU, "I am a European. I want to save Europe from the EU that killed it," Le Pen said. She also argued that France should "get rid of" the euro. Le Pen called the euro, shared by 19 countries in the European Union and blamed by some in France for a rise in prices, "the currency of bankers. It's not the people's currency."

Le Pen wants a referendum on France's membership in the EU, to restore French borders and return to the franc currency instead of the euro.

The two hopefuls sat opposite each other, with two journalists between them, and tackled key issues such as economy, Europe and national security in the only televised debate of the campaign.

Trailing in the polls, the debate was probably Le Pen's last chance to change the dynamics of the race ahead of the final weekend of a long and unpredictable campaign.

But the poll conducted by Elabe for BFMTV showing that Macron had convinced 63 percent of viewers compared to 34 percent for Le Pen suggests that she did little to win over new support.

In fact, the survey suggested that Macron would win around 60 percent to 40 percent if the vote were held now.

On Thursday, Macron held a campaign event in the southwest town of Albi, while Le Pen headed to Ennemain in the north.

The TV duel marked a new step into the mainstream for Le Pen, whose party was once considered by France's political establishment to be an extremist fringe that should be boycotted. When Jean-Marie Le Pen made it into the final round of the presidential election in 2002, his conservative opponent Jacques Chirac refused to debate with him out of fear of "normalizing hate and intolerance."

In the first round of the election on April 23, Marine Le Pen finished second by scoring 21.3 percent after softening the National Front's image over the past six years — but without fully removing the doubt about the party's core beliefs.

She sees her rise as the consequence of growing right-wing nationalism and a backlash against globalization, a trend reflected in the election of Donald Trump in the United States and Britain's shock vote to leave the European Union. "I am the candidate of the people of France such as we love it, of the nation that protects jobs, security, our borders," she said in her opening comments.
RELATED TOPICS