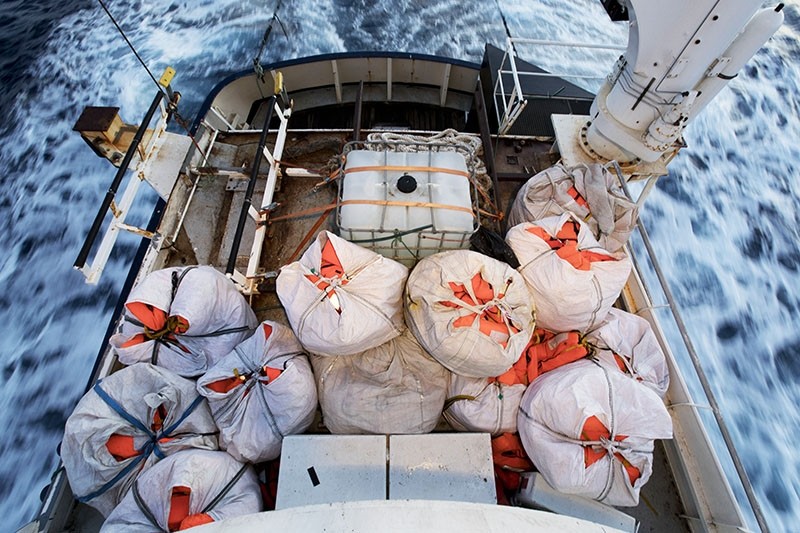 Lifejackets to be used during rescue operations are piled atop the Golfo Azurro vessel operated by Proactiva Open Arms, in the Mediterranean sea. (AP Archive Photo)
by Associated Press May 07, 2017 12:00 am

Over 500 migrants who were trying to cross the Mediterranean in several small boats that were in danger of capsizing have been rescued at sea, a Spanish aid organization said Sunday.

Proactiva Open Arms spokeswoman Laura Lanuza says the Golfo Azzurro, a former fishing trawler the group operates, plucked 514 migrants from over a dozen rubber and wooden boats during a 24-hour period from Saturday to Sunday morning.

The people rescued were refugees fleeing the war in Syria and migrants from sub-Saharan Africa who had set sail from Libya, according to Lanuza.

The rescue boat was filled to capacity and headed for an Italian port since the weather was turning bad, she said.

The Golfo Azzurro was operating as part of an NGO rescue fleet coordinated by the Italian coast guard.

Also on Sunday, Spain's maritime rescue service said a rescue boat and helicopter worked together to save three migrants in a small vessel found 4 kilometers ( 2 ½ miles) off the Spanish coast.

Hundreds of thousands of migrants and refugees have crossed the Mediterranean Sea in smugglers' boats in hopes of a better life in Europe, but thousands die each year trying. Libya is one of the prime launching points.

On Saturday, a Spanish navy frigate rescued another 651 migrants off the coast of Libya.