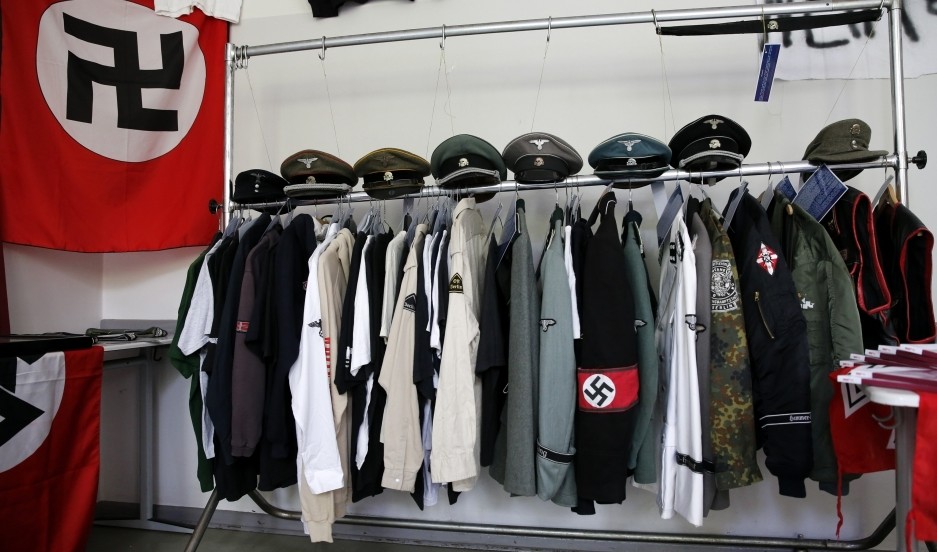 Nazi uniforms and a Swastika flag that were confiscated by the Berlin police during raids against German neo-Nazis are presented to the public during an open day at a police barracks in Berlin, September 7, 2014. (Reuters Photo)
by May 08, 2017 12:00 am

The head of Germany's armed forces has called for an inspection of all army barracks after investigators discovered Nazi-era military memorabilia in a garrison, broadening a scandal about right-wing extremism among soldiers.

The discovery at a barracks in Donaueschingen, in southwest Germany, was made in an investigation that began after similar Nazi-era items were found in the garrison of an army officer arrested on suspicion of planning a racially motivated attack.

As a result, General Inspector Volker Wieker ordered a wider search of barracks.

"The General Inspector has instructed that all properties be inspected to see whether rules on dealing with heritage with regard to the Wehrmacht and National Socialism are being observed," a Defence Ministry spokesman said.

"We must now investigate with all due rigor and with all candour in the armed forces," the minister told broadcaster ARD on Sunday evening. "The process is starting now, and more is sure to come out. We are not through the worst of it yet."

Displaying Nazi items such as swastikas is punishable under German law, although possession of regular Wehrmacht items is not. Von der Leyen said last week, however, she would not tolerate the veneration of the Wehrmacht in today's army, the Bundeswehr.

Von der Leyen said the arrested officer - who had falsely registered as a Syrian refugee - had likely worked with others to squirrel away 1,000 rounds of ammunition, but the chief federal prosecutor was still investigating the matter.

The suspect's goal, she said, had likely been to carry out an attack and then pin the blame on migrants.

Von der Leyen said the military had not taken the threat of right-wing extremism seriously enough but that the Bundeswehr had also been busy dealing with other issues such as the rise of Daesh terrorist group and increasing military threats from Russia.

"You have to have a reason to dig deeper," she said, noting that 18 members of the armed forces had in fact been dismissed for right-wing extremist views since 2012.

Von der Leyen provoked criticism from a soldiers' group and some lawmakers last week when she criticised what she called "weak leadership" in the military after the officer's arrest on suspicion of planning a racist attack.

On Thursday, she apologised for the tone of her criticism of the military over its handling of the racism case, as she sought to contain a divisive row in the buildup to national elections in September.

A preliminary report into the inspection of all barracks is due on Tuesday, with final results due on May 16.