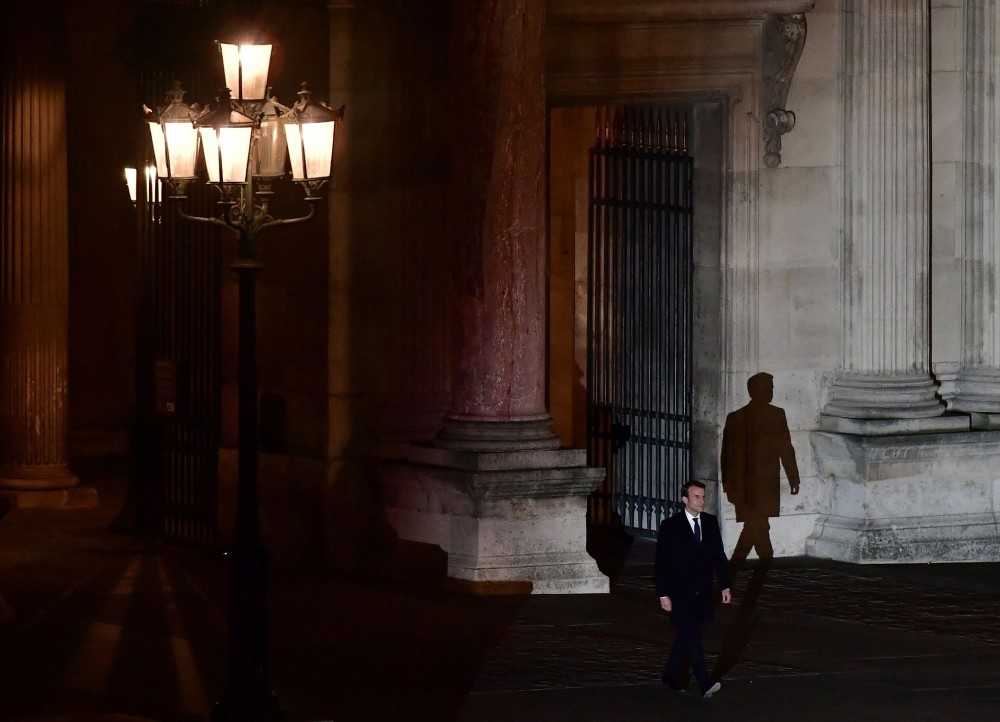 French president-elect Emmanuel Macron greets supporters as he arrives to deliver a speech in front of the Pyramid at the Louvre Museum in Paris on May 7.
by Daily Sabah with Wires May 09, 2017 12:00 am

After French president-elect Macron's resounding victory, skepticism has arisen over whether he can form a working parliamentary majority without a political party, while facing the formidable challenge of enacting his pro-EU, liberal program in the face of Europe's growing right-wing populism

Emmanuel Macron won a resounding victory in the French presidential election, but the focus shifted immediately to whether he can govern the country without the support of a traditional party.

At 39, the pro-EU former investment banker will become France's youngest-ever president when he is inaugurated this Sunday after crushing far-right leader Marine Le Pen in a run-off vote.However, Macron faces formidable challenges to his program, while trying to unite a fractured and demoralized country. In fact, the election was just the first hurdle. In order to govern properly, Macron's fledgling political movement "En Marche" must now gather a majority in June's parliamentary elections.

Macron is the first president of modern France to be elected as an independent. Rivals who supported him against Le Pen in the presidential vote will be mobilized this time to defeat him in the parliamentary vote in favor of their own party members for the National Assembly.

If another party wins the majority, Macron could be pressured to choose a prime minister from that party in a situation called "co-habitation."

The question of whether Macron will be able to respond to the needs of the far-right is the second challenge of his presidency. The task of Macron, who's described himself as a "convinced European," will be to show Le Pen's voters resistant to Europe that he will follow through on his pledge to fundamentally reform the union.

France is one of the countries bearing most of the weight of the negative consequences resulting from mass immigration, as is apparent by the frequent anti-police riots in the urban areas with immigrant backgrounds, as well as the fact that a lot of the terrorists in the attacks over the past two years, which have left hundreds dead and thousands injured, managed to infiltrate Europe by posing as asylum seekers, via the ongoing waves of uncontrolled, mass immigration.

In an early plea for unity, Macron reached out to Le Pen's supporters after a vicious election campaign that exposed deep economic and social divisions, as well as tensions provoked by identity and immigration.

"I have heard the anger, the anxiety and the doubts that a large number of you have expressed," Macron told thousands of cheering and flag-waving supporters at a victory party in the courtyard of the Louvre museum in Paris.

"I will fight with all of my strength against the divisions that are undermining us," he said.

Le Pen responded to the defeat by vowing she would lead her anti-immigration National Front (FN) strongly in the legislative elections. A key aide said the party would change its name as part of a revamp.

Nigel Farage, who spearheaded a campaign for Britain's exit from the EU as former leader of the U.K. Independence Party (UKIP), said the French voters had been tricked by a "giant deceit," claiming Macron "will become [European Commission President Jean-Claude] Juncker's puppet."

"Euroscepticism in France has taken a massive leap forward," Farage said, adding that National Front leader Le Pen "can win in 2022" if she runs in the next election.

The final results showed that Macron had won 66.1 percent of the votes to 33.9 percent for Le Pen. Jean Petaux, a professor at Sciences Po Bordeaux commented on the voter behavior stating that the majority of French people "chose not to let France to the nationalism defended by the Front National."

Regarding the low voter turnout, many commentators said the fact that a third of the electorate either abstained or cast blank or invalid votes on Sunday showed Macron would start his mandate under intense scrutiny.

In France, abstention rates are the highest among older and younger voters, with the younger population counting as the lowest proportion of registered voters. During the last French presidential election in 2012, nearly one registered voter out of five, or 19 percent of the voters under the age of 25 did not vote — one-and-a-half times the abstention rate, or 13 percent, of the overall population.