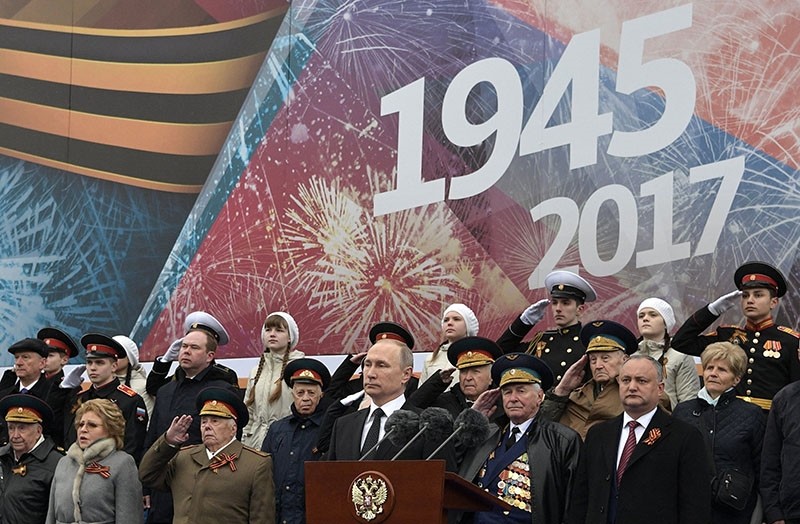 Russian President Vladimir Putin on Tuesday told the annual Victory Day parade on Red Square that the horrors of World War II demonstrate the necessity of countries working together to prevent war.

Russia celebrates the 1945 defeat of Nazi Germany every May 9 to honor those who fought and died for their country.

"This monstrous tragedy was not able to be prevented primarily because of the connivance of the criminal ideology of racial superiority and due to the lack of unity among the world's leading nations," he said.

"To effectively combat terrorism, extremism, neo-Nazism and other threats, consolidation of the entire international community is necessary."

The Soviet Union is estimated to have lost 26 million people in the war, including 8 million soldiers, and the immense suffering contributes to Victory Day's status as Russia's most important secular holiday.

"We feel a piercing blood relationship with a generation of heroes and victors," Putin said.

Thick clouds forced the cancellation of the traditional dramatic conclusion to the parade — the roaring flyover by scores of military aircraft.

The Red Square parade is a highly ritualized display and marked changes in its order are unusual.

The Defense Ministry had said cloud-seeding planes would be deployed to disperse the overcast skies Tuesday above Moscow. That has been done previously when poor weather threatened. It wasn't immediately clear if the planes had been deployed.

Parades were held across Russia's sprawling expanse as well as in the Russia-annexed Crimea Peninsula, but the Red Square parade is the centerpiece of Russia's observances.

About 10,000 soldiers participated, standing rigidly as Defense Minister Sergei Shoigu reviewed them while standing in an open-top limousine, then marching out to make way for a display of military vehicles ranging from armored cars to lumbering Topol ICBM launchers.

The parade gave the first public showing of Tor and Pantsir mobile surface-to-air missile that have been adapted for use in Russia's Arctic forces, their white-and-black winter camouflage standing out amid the olive drab of other war machines.

"The armed forces of Russia are capable of repelling any potential aggression," Putin said.