Up to 245 migrants missing after 2 Mediterranean shipwrecks, UN says 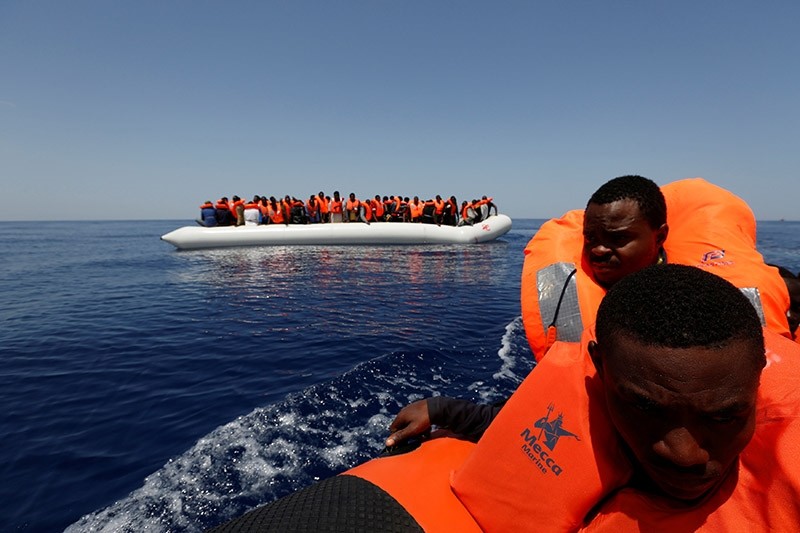 Migrants react after being rescued by the Malta-based NGO Migrant Offshore Aid Station (MOAS) ship Phoenix during a rescue operation in the central Mediterranean, in international waters off the Libya, May 4, 2017. (Reuters Photo)
by Associated Press
May 09, 2017 12:00 am

Two wrecks of migrant ships in the Mediterranean have claimed as many as 245 lives, including those of at least five children, according to survivor accounts given to U.N. agencies and authorities in Sicily, where dozens of rescued migrants were taken.

Survivors of one wreck, some of them hospitalized in Pozzallo, Sicily, where they were being treated for hypothermia and exhaustion, told authorities who interviewed them that their traffickers had crammed some 130-140 people, apparently all from central African countries, into a motorized rubber dinghy designed to hold at most 20 people.

The dinghy started deflating on one end, the passengers quickly shifted their positions in the boat, and the craft tipped over, authorities said, based on numerous survivors' descriptions.

The officials spoke on condition of anonymity since the shipwreck is being investigated.

The dinghy wasn't equipped with any distress signaling equipment. The 50 or so survivors clung for hours to the wreckage of the dinghy until they were spotted by a patrol plane and rescued by a Danish cargo ship, which was dispatched to their aid by the Italian Coast Guard, which coordinates rescue operations.

One survivor is a Nigerian woman, whose 5-month-old baby died. The infant's corpse was one of the few bodies so far recovered, authorities said.

Police in Sicily said in a statement that many of the survivors recounted that among the 80 or so who drowned was one of the smugglers who had been steering the boat.

"They couldn't even remember who saved them. They were completely shocked and traumatized," said Carlotta Sami, Rome-based spokeswoman for the U.N. refugee agency.

Meanwhile, at its Geneva headquarters, the refugee agency said that one of its partner agencies, the International Medical Corps, reported a shipwreck on Sunday off the Libyan coast in which 163 people are missing and feared dead. The U.N. agency said one woman and six men were rescued by the Libyan Coast Guard.

That boat was intercepted by the Libyan coast guard, said the UNHRC's Sami, who had no other details.

Many of those who brave the risky central Mediterranean route between Libya and Italy are migrants from Africa seeking to flee from conflicts, political persecution at home or to find better economic opportunities in Europe.

Overall, UNHCR said Tuesday that more than 1,300 people have disappeared and are believed to have died this year while crossing the Mediterranean from North Africa to Italy, while some 43,000 migrants and asylum-seekers reached Italy.

The International Organization for Migration, in separate remarks, gave a lower estimate of the total number of migrant lives lost — 190 — in the two shipwrecks. It estimated about 80 people died from the sinking of the dinghy off Italy, and at least 113 following the shipwreck off the coast near Az Zawiyah, Libya.

"There is normally pent-up demand," Millman said. "The summer tends to be very, very busy because sea conditions are better."

And in Spain on Tuesday, officials said about 300 migrants tried to scramble across the 6-meter (20-foot) border fence separating Spain's North African enclave of Melilla from Morocco, with many throwing stones and other objects at police.

Melilla's Interior Ministry said most of the migrants were pushed back by Spanish and Moroccan police, but about 100 managed to enter the city. It said three officers and three migrants were treated for injuries.

Many of the thousands of economic migrants or refugees who have been brought to Italy after rescue at sea told authorities that they spent months in inhumane detention facilities in Libya, often suffering torture, sexual abuse or labor exploitation, before the smugglers sent them out to sea.

A Rome-based IOM spokesman, Flavio Di Giacomo, said in an interview in Tuesday's La Stampa newspaper that there have been recent indications that some migrants have decided to flee the harsh conditions in Libya to return to their homelands, renouncing their dream of reaching Europe and safety, although "the majority take the risk of the sea."

And that voyage is getting ever riskier. Sami told The Associated Press in an interview that the smugglers no longer provide satellite phones so the migrants can call for help, "nor engines or even fuel."

"They are completely adrift" and at the mercy of sea, Sami said.

In some cases, migrants have recounted that their smugglers removed the dinghy's motor and sped off in another dinghy after traveling a few miles out from Libya.

The figure for the Mediterranean as a whole, including Greece, Cyprus and Spain, was 49,310 as of Sunday. For the same period last year, the total number of sea arrivals was far higher — 187,569. That was because some 155,000 arrived in Greece from Turkey, compared with only 5,555 this year.