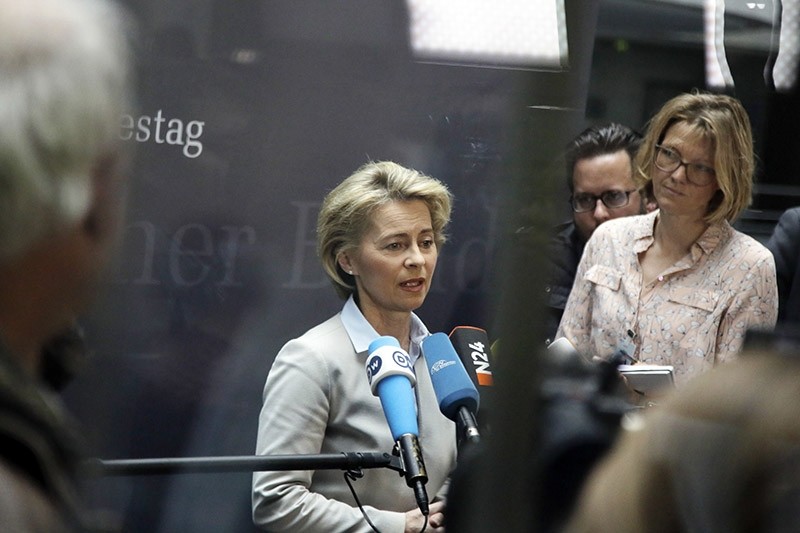 German Defense Minister Ursula von der Leyen, center, briefs the media as she arrives for a meeting of the German parliament's committee for defense in Berlin, Wednesday, May 10, 2017. (AP Photo)
by Compiled from Wire Services May 10, 2017 12:00 am

German Defense Minister Ursula von der Leyen on Wednesday announced a plan to fundamentally reform the military amid a far-right extremism probe that has implicated multiple Bundeswehr officers and raised questions about her leadership.

Speaking in front of the parliamentary defense committee in the Bundestag, von der Leyen said that there was a "broad process" underway to reform leadership structures "from the recruit to the general, from the aide to the minister."

She said the reform effort would include rethinking leadership functions, disciplinary measures, the political education of soldiers and the so-called Traditionserlass, a set of rules governing how the Bundeswehr deals with the country's historical military traditions.

The current rules "include many good points but allow for back doors," she said, following revelations that Nazi-era army steel helmets, weapons and pictures were on open display in some army barracks.

Amid the scandal, debate has flared on why a Wehrmacht item can be shown in a glass display but not in an officers' mess, and why several barracks are still named after World War II field marshall Erwin Rommel, dubbed the "Desert Fox" for his North Africa campaign.

Von der Leyen had pledged zero tolerance on all forms of extremism after it emerged the top suspect arrested, Lieutenant Franco Albrecht, 28, had expressed racist views years ago but that superior officers looked the other way out of a "misunderstood esprit de corps".

The minister, under fire over the scandal, also announced changes to reporting chains, disciplinary procedures and the civics education of soldiers, speaking before a hearing by the parliamentary defense committee.

Germany's Bundeswehr -- including the army, navy and air force -- has a troop strength of about 180,000 active military personnel, the second largest in the EU after France.

The bizarre far-right plot has, meanwhile, widened with the arrest Tuesday of a second suspect from the same Franco-German base near Strasbourg, a lieutenant identified only as Maximilian T., 27.

According to prosecutors, Albrecht had managed to create the false identity of a Syrian fruit seller from Damascus and to register himself as a refugee who was granted asylum, a space in a shelter and monthly state benefits.

The suspects' plan, say prosecutors, was to commit an attack, for which they had obtained a pistol and drawn up a hit list of pro-refugee politicians, including then president Joachim Gauck and Justice Minister Heiko Maas.

The pair, along with 24-year-old student Mathias F., had hoped the murder would "be seen by the population as a terrorist act committed by a recognized refugee," said the prosecution.

Germany has taken in more than one million asylum seekers since 2015, many from Syria, Iraq and Afghanistan, amid an initial wave of goodwill followed by an anti-foreigner backlash and a spate of racist hate crimes.