Austrian gov't on brink of collapse amid coalition tensions 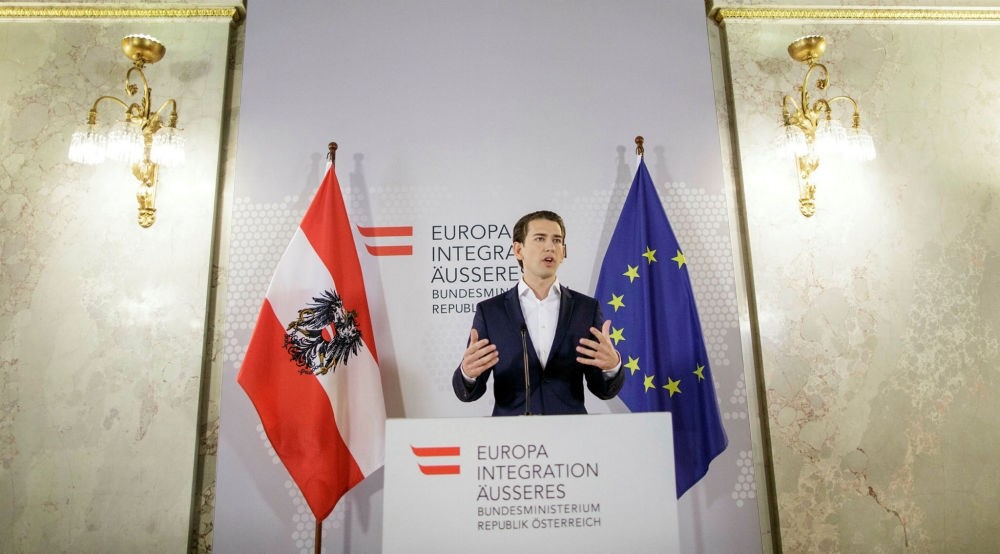 Sebastian Kurz, Austrian Minister of Foreign Affairs, gestures as he speaks during a statement given to the media, in Vienna, Austria, May 12. (EPA Photo)
by Compiled from Wire Services May 13, 2017 12:00 am

After the shock resignation of the head of the center-right party, Austrian Foreign Minister Kurz called for a snap parliamentary election while the far-right leads in the opinion polls

Austria's squabbling centrist coalition looked increasingly on the brink Friday as Foreign Minister Sebastian Kurz made clear he would pull his center-right People's Party (OeVP) out of the government if he becomes its new chief.

A new election would give the anti-immigration Freedom Party (FPO) a chance of entering national government less than a year after its candidate lost a close-fought presidential race. Polls regularly show the FPO running first on about 30 percent, with Kern's Social Democrats (SPOe) a close second.

Vice Chancellor Reinhold Mitterlehner, leader of the conservative People's Party (OeVP), said earlier last Wednesday he was quitting after having failed to quell party infighting and speculation about its future leadership.

Mitterlehner's surprise resignation raises pressure on Foreign Minister Kurz to take over as head of the OVP, as he is widely expected to do before the next election.

Kurz has said he has no interest in taking over the OVP at present but several polls suggest that it would boost the party's ratings and thrust it into first place if he did.

Deep rifts have plagued the "grand coalition" between the OeVP and the SPOe led by Chancellor Christian Kern, spurring speculation that the unhappy union would dissolve long before the next scheduled election in autumn 2018.

The two parties already announced a new coalition agreement in January that included several law-and-order measures aimed at eroding support for the FPO and giving their fractious government a new lease of life. But squabbling between the SPO and OVP has continued.

Interior Minister Wolfgang Sobotka, an OVP hawk, accused Kern in an interview this week of "failure as chancellor", prompting SPO ministers to round on Kurz.

Such quarrels have fueled a view among many voters that the government is ineffective, which has helped the FPO.

"This government is marked by paralysis and division -- that is embarrassing and unacceptable," FPO leader Heinz-Christian Strache told APA, calling for a snap election.

Mitterlehner's inability to quell indiscipline and persistent speculation about when Kurz might replace him appeared to have prompted his decision to quit.

"I am not a place-holder," Mitterlehner told a hastily convened news conference on Wednesday.

Where his resignation leaves the party and the coalition remains unclear.

"There are various possible scenarios: that the new OVP leader calls (an election) immediately at the weekend, or someone takes over in the interim until Kurz takes over before elections," he added. "Of course, Kurz can take over now and say ... 'We will pull through together with the SPO'."

Like other centrist factions in Europe, the OeVP and SPOe have suffered the wrath of disillusioned voters over rising unemployment and a huge influx of migrants. The parties, which have dominated Austrian politics since 1945, were dealt a disastrous blow in the 2016 presidential ballot when both their candidates failed to make it into the run-off.
RELATED TOPICS