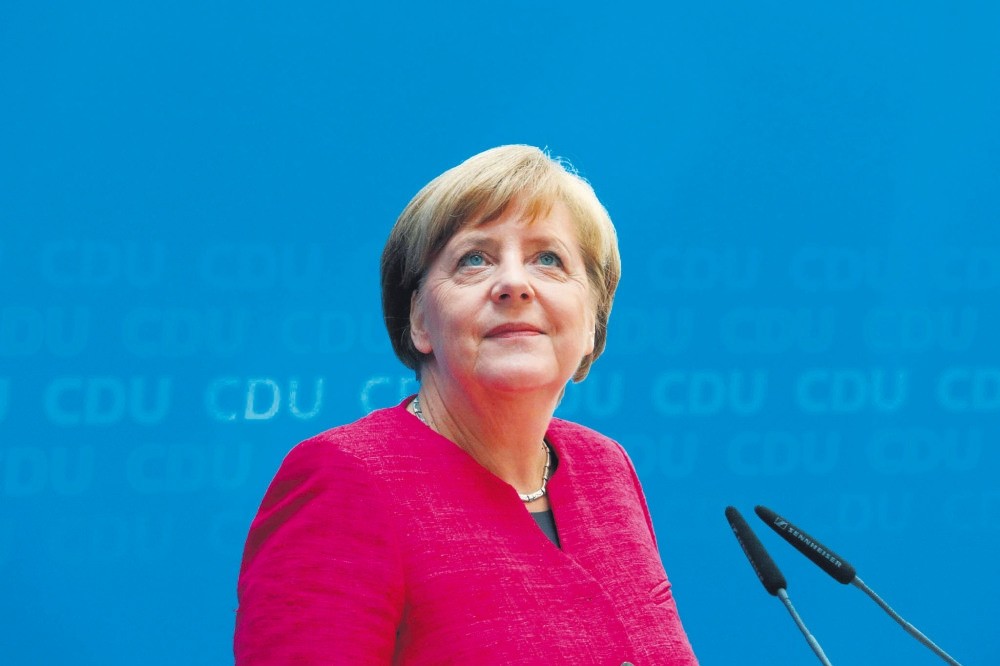 German Chancellor Angela Merkel at a press conference in Berlin, Germany, May 15.
by Compiled from Wire Services May 16, 2017 12:00 am

German Chancellor Angela Merkel dealt a devastating blow to her main political rival on Sunday, just four months ahead of the national elections. Merkel's Christian Democratic Union (CDU) claimed 34.3 percent of the votes in North Rhine-Westphalia (NRW), early results showed, snatching control of the sprawling industrial region which has been a Social Democratic Party (SPD) stronghold for decades. On the other hand, in a serious hit to the SPD's confidence ahead of the general elections in September, the party managed to garner 30.6 percent, its worst ever in the state and sharply down from their 2012 showing of 39.1 percent.

SPD leader Martin Schulz admitted that the loss in his home state marked a "difficult day for the SPD" and for him personally, but urged supporters to battle on.

Schulz said, the run-up to Germany's national election in September would be "rocky," a day after his Social Democrats suffered a crushing defeat in their traditional heartland to Angela Merkel's CDU.

"We have a long road until the election and it will be rocky and hard," Schulz said after his SPD fell behind the CDU in North Rhine Westphalia.

He added that his party was "battle-hardened" and would fight to win back voters ahead of the September 24 polls.

The former European Parliament president turned to France for courage.

"My friend Emmanuel Macron was at the bottom five months ago, and now, he is president," said Schulz of the new French leader, who took office Sunday.

However, Germany's best-selling daily Bild noted that "with the clear state election failures, it would be very difficult for the SPD to win the general elections in September." Likewise, Spiegel Online said, "Martin Schulz now needs a miracle."

With a fifth of Germans, 13.1 million, eligible to vote in North Rhine-Westphalia, an election in the western state is always closely watched. It carries even higher stakes this year, being the last regional vote before national polls and having a direct impact on whether the SPD can close a nationwide gap of around 10 percentage points with the CDU.

"We are going into the national elections with a lot of confidence," said lawmaker Michael Grosse-Broemer, who heads the CDU parliamentary group in the Bundestag, noting that the latest win gave the party further "tailwind."

Sunday's humiliating result in its stronghold may raise serious questions on the center-left party's strategy.

Schulz had hoped that his push for "social justice" would resonate in NRW, which has lagged behind western Germany economically. He argued that many people are struggling in temporary or low-paid jobs even though the country as a whole is growing richer.

But, Merkel, who had also gone all out to sway the state of 18 million people, including 4.2 million of migrant origins, took aim at Schulz's arguments.

Her party, she said, offered "justice in the sense of jobs, strong budgets, and funds for local communities." She had urged voters to look at her government's economic record, noting that with 7.5 percent unemployment, the state fares worse than the national rate of 5.8 percent.

Merkel have faced a tougher re-election campaign than previously. Merkel's decision last September to let in people fleeing war has become her Achilles' heel, as public resentment mounted after more than a million asylum seekers arrived in Europe's biggest economy since the start of 2015.

Concerns about integration and security have pushed her popularity down and fueled the rise of the anti-immigrant Alternative for Germany (AfD) party.