Daesh terrorist could have been arrested before Berlin attack, official says 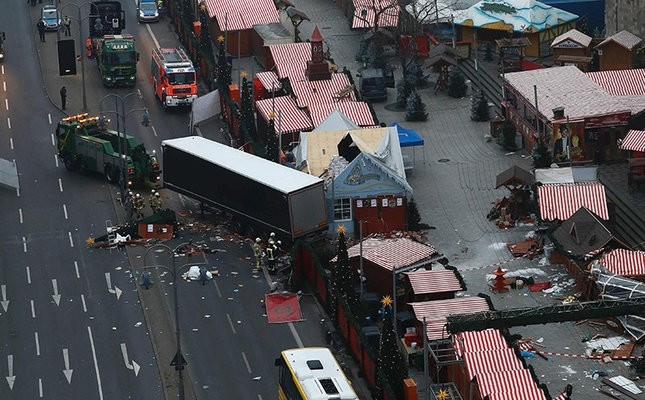 An official document has surfaced that suggests the man who drove a truck into a Christmas market in Berlin, killing 12 people, could have been arrested before the attack, the city's top security official said Wednesday.

Authorities are looking into the possibility that officials at the German capital's criminal police office deliberately withheld or even tampered with the information after the attack, said Andreas Geisel, Berlin's state interior minister.

He said that the state government has filed a criminal complaint alleging obstruction of justice, news agency dpa reported.

"In experts' opinion, this information would have been sufficient to secure an arrest warrant from prosecutors," he added.

A second criminal police office document was created on Jan. 17 but apparently backdated to Nov. 1, Geisel said. That document mentions drug dealing on a very small scale rather than a large scale.

"This news is depressing and sheds a whole new light on this attack," Geisel said. "To put it clearly, on this basis of an arrest it might have been possible to prevent this attack."

The new information was unearthed in an investigation by Bruno Jost, a former federal prosecutor appointed by the city government to examine possible errors by authorities in the case.

Geisel said officials will question employees before deciding whether to suspend anyone.

Twelve people were killed when Amri drove a commandeered truck into a Christmas market in downtown Berlin on Dec. 19. Amri was killed four days later in a shootout with police in Italy.

Amri, a Tunisian who came to Germany in mid-2015, had been rejected for asylum but authorities had been unable to deport him due to paperwork problems.

Authorities have already said that Amri moved around Germany and used a large number of aliases. Within months of his arrival, authorities added Amri to a list of potentially violent extremists.

Berlin prosecutors launched an investigation of Amri in March 2016 following a tip from federal security agencies, who warned that he might be planning a break-in to finance the purchase of automatic weapons for use in a possible future attack.

Officials have said previously that surveillance showed Amri did deal drugs in a notorious Berlin park and was involved in a bar brawl, but no evidence was found to substantiate the original warning.