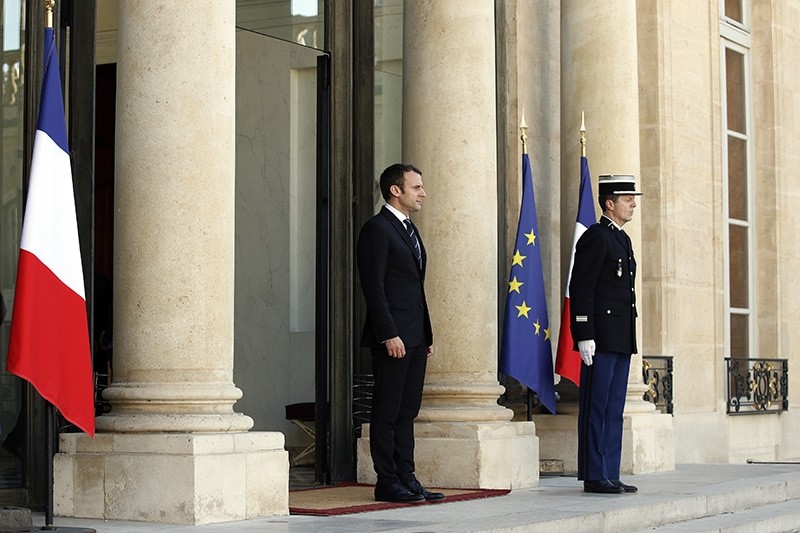 French President Emmanuel Macron waits to welcome UN Secretary General Antonio Guterres at the Elysee Palace in Paris, France, Tuesday, May 16, 2017 (AP Photo)
by Compiled from Wire Services May 17, 2017 12:00 am

Newly inaugurated centrist French president Emmanuel Macron chose his government on Wednesday, appointing a mix of political hues to the top jobs as part of his promise to bridge the right-left divide.

Having already made conservative Edouard Philippe, a member of The Republicans (LR) party, his prime minister earlier in the week, Macron picked Bruno Le Maire a pro-European, German-speaking rightist, also from The Republicans, as his economy minister.

As interior minister, he picked Gerard Collomb, the mayor of Lyon who was one of the first Socialists to be a vocal supporter of Macron.

The 69-year-old Le Drian was France's defense minister during the five-year term of former President Francois Hollande. He was one of the Socialist government's most popular ministers.

The government appointments are part of a delicate balancing act Macron has to perform ahead of the mid-June legislative elections.

By becoming president with no established party backing he has already thrown traditional party loyalties into the air, and early poll predictions show his start-up Republic on the Move (REM) party will come from nowhere to have more lower house seats than any other.

To make sure he ends up with a workable majority, surrounding himself with people tempted away from both sides of the political divide broadens his support and weakens the main traditional parties, LR and the Socialists. By doing so, though, he could also be increasing the risk of dissent in future.

Other appointments included Francois Bayrou, the head of the centrist Modem party, as justice minister and Marielle de Sarnez as junior Europe minister.

Macron had promised to include people from civil society in his government. To that end, Nicolas Hulot, a well-known environmentalist, was named as ecology minister.