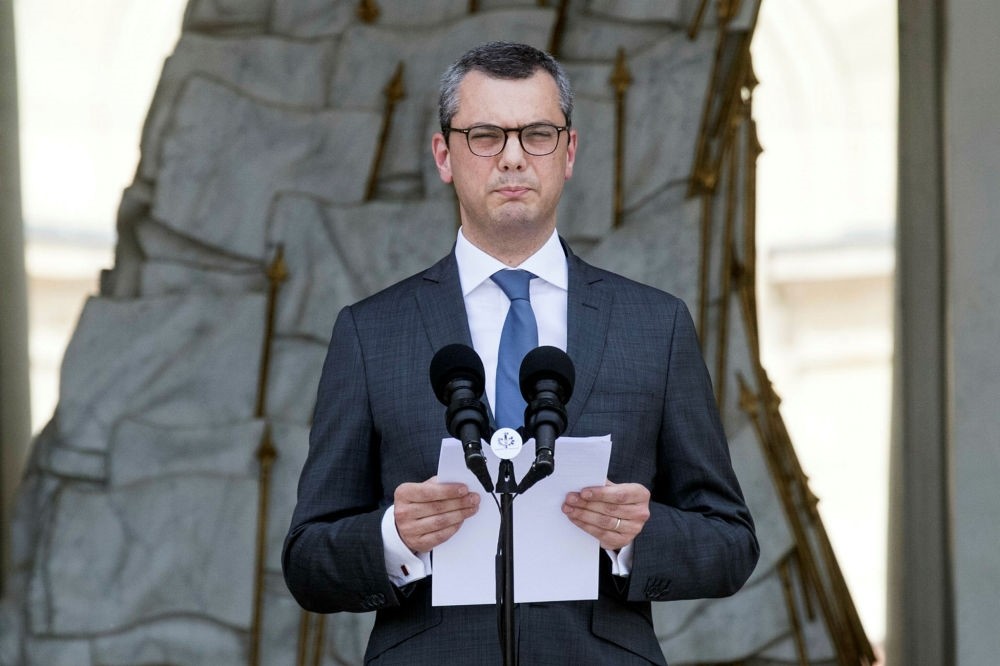 Elysu00e9e Palace General Secretary Alex Kohler announces the new members of the French cabinet at the Elysu00e9e Palace in Paris, France, May 17.
by Compiled from Wire Services May 18, 2017 12:00 am

Newly inaugurated centrist French president Emmanuel Macron chose his government yesterday, appointing a mix of political hues to the top jobs as part of his promise to bridge the right-left divide.

Having already made conservative Edouard Philippe, a member of The Republicans party, his prime minister earlier in the week, Macron picked Bruno Le Maire a pro-European, German-speaking rightist, also from The Republicans, as his economy minister. As interior minister, he picked Gerard Collomb, the mayor of Lyon who was one of the first Socialists to be a vocal supporter of Macron.

The government appointments are part of a delicate balancing act Macron has to perform ahead of the mid-June legislative elections.

By becoming president with no established party backing he has already thrown traditional party loyalties into the air, and early poll predictions show his start-up Republic on the Move (REM) party will come from nowhere to have more lower house seats than any other.

To make sure he ends up with a workable majority, surrounding himself with people tempted away from both sides of the political divide broadens his support and weakens the main traditional parties, LR and the Socialists. By doing so, though, he could also be increasing the risk of dissent in future.

Other appointments included Francois Bayrou, the head of the centrist Modem party, as justice minister and Marielle de Sarnez as junior Europe minister.

Macron had promised to include people from civil society in his government. To that end, Nicolas Hulot, a well-known environmentalist, was named as ecology minister.

After a delay to dig deeper into proposed ministers' tax records and potential conflicts of interest, Macron's office announced his government. Macron has pledged to fight corruption after tax evasion and other scandals hit the previous government. The 5-year term of his immediate predecessor, Socialist President Francois Hollande, was tarnished early on by financial scandals.

After the independent Macron trounced establishment parties in the presidential election, Macron has tried to carefully balance the government between left and right, women and men, new faces and political heavyweights. The president named low-profile, center-right Edouard Philippe as prime minister on Monday.

While French media speculate about who might make the cut, French websites are hosting games allowing users to create their own Cabinet from a motley crew of rumored personalities. They range from quirky to obscure to old-school: math genius Cedric Villani; former train and subway boss Anne-Marie Idrac; Axelle Tessandier, who created a startup in San Francisco before joining Macron's campaign; and a string of former ministers in Socialist and conservative governments.