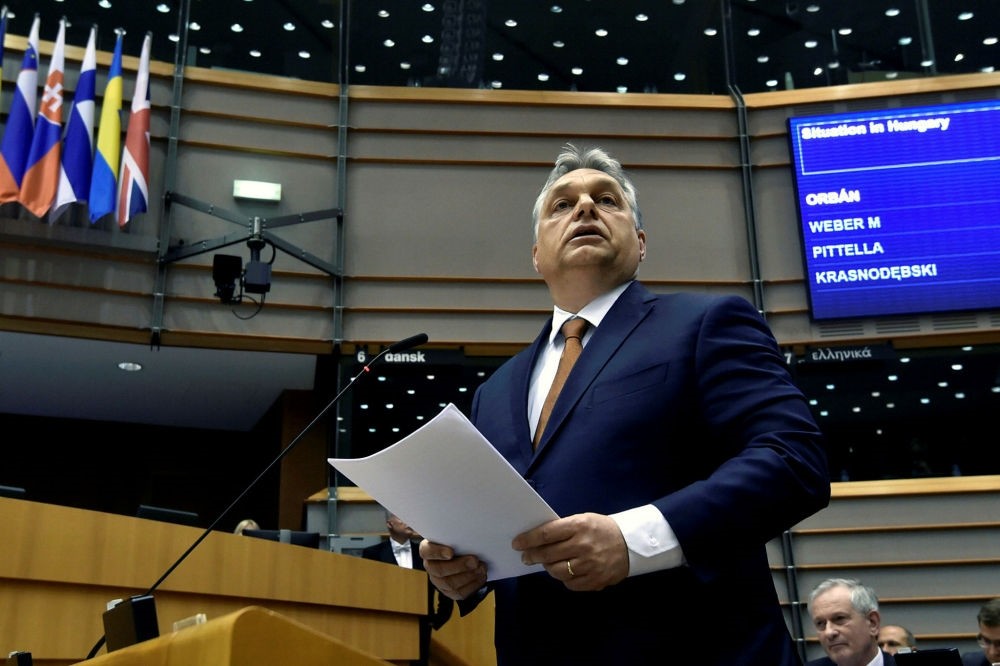 Hungary's Prime Minister Viktor Orban speaks during a plenary session at the European Parliament (EP) in Brussels, Belgium, April 26.
by Compiled from Wire Services May 19, 2017 12:00 am

Hungary will keep up tough laws on immigrants and the fence along its southern border in place despite a call by the European Parliament to repeal laws tightening rules on asylum-seekers, Prime Minister Viktor Orban's chief of staff said yesterday.

The European Parliament on Wednesday condemned what it called a "serious deterioration" in the rule of law and fundamental rights in Hungary.

The EU resolution also urged Hungary to reach an agreement with U.S. authorities that would enable the Budapest-based Central European University (CEU), founded by U.S. financier George Soros, to continue operating as a free institution.

Hungary's foreign minister dismissed the European Parliament resolution, saying that it amounted to a "new attack on Hungary by George Soros' network".

"European institutions are clearly unable to accept the fact that ... the Government of Hungary is continuing to practice a migration policy that is exclusively aimed at ensuring the security of Hungary," Foreign Minister Peter Szijjarto said.

Orban said the CEU is "cheating" because it issues diplomas accepted both in the United States and in Hungary, where it has been operating since 1993. The university is accredited in New York state but has no campus there. He says this gives it an unfair advantage over other Hungarian universities.

The announcement marks a new low in the tense relations between Brussels and Budapest over the government's rights record.

His government has also handed out a questionnaire entitled "Let's stop Brussels!" asking households how to deal with EU policies that it says threaten Hungary's independence.

Hungary's parliament has separately sparked an international outcry after approving a law last month for the systematic detention of all asylum seekers in camps on the border composed of shipping containers.

The European Parliament will prepare a formal resolution to launch a process to determine whether there is a "clear risk of a serious breach" of EU values by Budapest. The process would be based on article 7 of the EU Treaty, whereby EU governments can ask a member state to take specific action to end a serious breach of EU values.