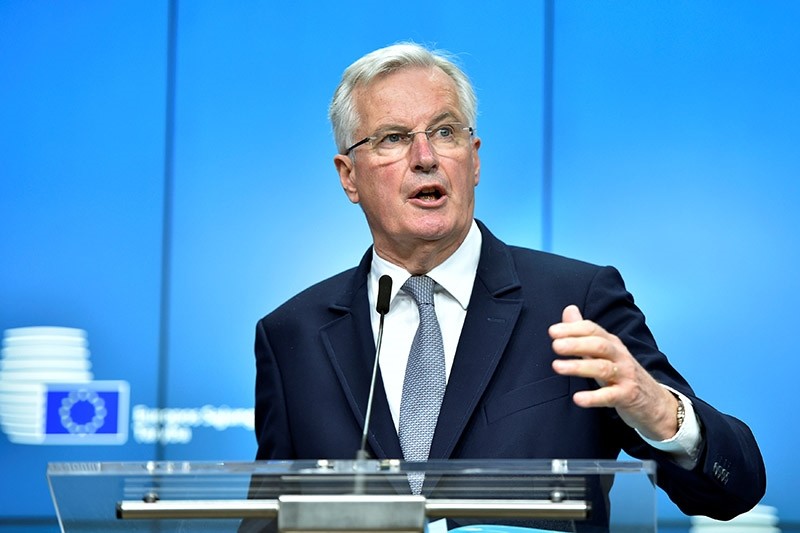 European Union Chief Negotiator for Brexit Michel Barnier gestures during a news conference after a European General Affairs Ministers meeting in Brussels (Reuters Photo)
by Compiled from Wire Services May 22, 2017 12:00 am

European Union governments agreed on a common Brexit negotiating plan on Monday and renewed their insistence that they would not open talks on a post-Brexit trade deal until London agrees to settle what it owes the Union.The talks will quickly center on the tens of billions in costs London would be expected to pay for the divorce.

EU ministers built on the strong stance which was reached unanimously at an EU summit last month, and further tightened the legal wording in the mandate for Brexit negotiator Michel Barnier.

The 27 ministers said in a statement Britain "must honor its share of all the obligations undertaken while being a member" and also "fully cover the specific costs related to the withdrawal, such as the relocation of EU agencies currently based in the U.K."

The cost estimates for Britain have gone as high a 100 billion euros ($111.8 billion) for the withdrawal, a sum which British government officials have ridiculed, with British Foreign Secretary Boris Johnson going as far as to venture that the EU should pay Britain instead for its departure.

Monday's explicit language on the payments Britain should make even included "a schedule of payments" from London.

"They will be tough. There will be moments of tension," said Barnier of the upcoming negotiations.

Maltese Deputy Prime Minister Louis Grech, who chaired the meeting, said that "we are under no illusion that these negotiations will be complex and far from straightforward. Moreover, there is also a very limited timeframe which adds pressure to an already difficult process."

Unraveling the current relationship which took almost a half century to build faces a two-year deadline expiring in March 2019.

The EU's 27 again insisted they were ready to negotiate as of today, but were facing foot-dragging from Britain, which already voted in a referendum on June 23 to leave, yet will not be ready to enter the talks after the June 8 snap election.

Barnier said the first talks with his British counterpart were expected in the week of June 19, little over a week after Britain's early election which is expected to strengthen conservative British Prime Minister Theresa May's position at home.

"We are ready," Barnier said. "But we need to put things in perspective. It is the settle the accounts, assure and orderly withdrawal that the U.K. requested. It is their choice and responsibility."

The EU nations have agreed to center on the rights of their citizens in Britain, and the British living in the EU as a first issue to settle, along with settling the bill and getting a deal on the EU border in Ireland with the U.K.'s Northern Ireland.

Only if there is "sufficient progress" can a future relationship be looked at, Barnier said. The British government wants a future trade relationship and the divorce proceedings to happen at the same time. There has been talk in London of having a hard Brexit with no deal in place rather than a bad agreement.

"The faster we find a deal on these priority issues, the earlier we will be able to start discussing our future relationship in a constructive way," said Barnier, unwilling and unable to budge on the timing of the talks, considering the instructions he got from the 27 ministers.

Grech said "We are very well prepared for these negotiations and the remarkable thing is that we are unified at 27."