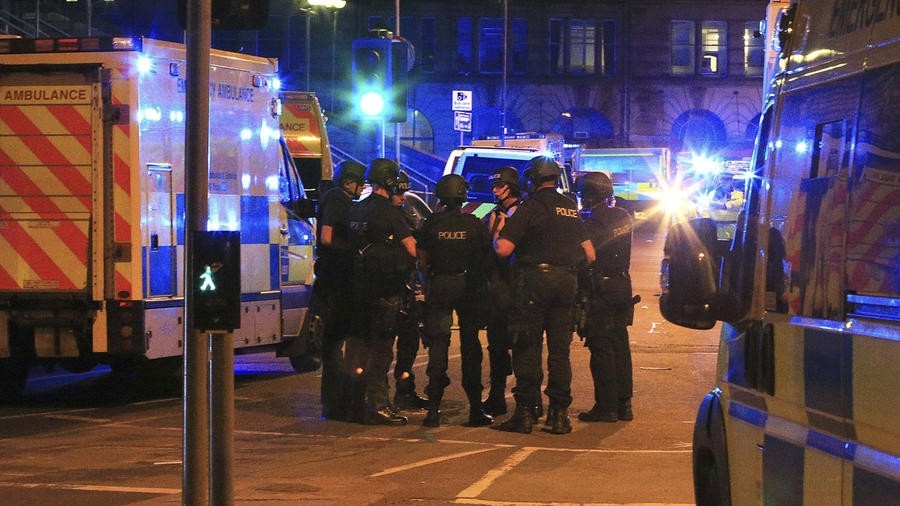 Armed police gather at Manchester Arena after reports of an explosion at the venue during an Ariana Grande concert in Manchester, England Monday, May 22, 2017. (AP Photo)
by Compiled from Wire Services May 23, 2017 12:00 am

The lone male attacker who detonated a home-made device in the foyer of the venue after a concert by U.S. singer Ariana Grande died in the attack, he confirmed. "What I can confirm is that there are children among the deceased," Hopkins was cited by the Press Association as saying. At least 59 people were injured in the attack, Hopkins said.

Media sources reported later Tuesday that a 23-year-old man was arrested in connection with the deadly Manchester attack.

"With regards to the ongoing investigation into last night's horrific attack at the Manchester Arena, we can confirm we have arrested a 23-year-old man in South Manchester," the police said in a statement.

In a statement published on its affiliated news website Amaq, Daesh terrorist group claimed responsibility for the attack and said it was carried out with an explosive device planted at concert.

Northwest Ambulance Service previously said a number of "walking wounded" were treated at the scene.

Police cars, bomb-disposal units and 60 ambulances raced to the scene as the scale of the carnage became clear.

A video posted on Twitter showed fans screaming and running inside the venue.

Greater Manchester Police Chief Constable Ian Hopkins said police were treating the blast as an act of terrorism "until we know otherwise."

Manchester Arena said on its website that the blast struck outside the venue as concertgoers were leaving. Some eyewitnesses said it happened in the foyer of the arena just after the concert ended.

One witness said Grande had just finished her final song and said "Thank you, Manchester," before leaving the stage.

The incident led to a nightlong search for loved ones as parents tried to locate their teenage children and groups of friends scattered by the explosion sought to find one another.

Taxi services offered to give stranded concertgoers rides home for free, and residents opened their homes to provide lodging for people who could not get home because public transport had shut down.

VIDEO - People flee the area of #ManchesterArena as police cars rush to the scene to respond to 'serious incident'https://t.co/FLwWL6Urwn pic.twitter.com/tkQvvqpaoN

British Prime Minister Theresa May said the government was working to establish "the full details of what is being treated by the police as an appalling terrorist attack."

May is due to chair a meeting of the government's COBRA emergency committee later Tuesday. She and other candidates suspended campaigning for Britain's June 8 election after the blast.

Police advised the public to avoid the area around the Manchester Arena, and the train station near the arena, Victoria Station, was evacuated and all trains canceled.

Manchester Arena, the largest indoor arena in Europe, opened in 1995 and is a popular concert and sporting venue.

Desperate parents and friends used social media to search for loved ones who attended Monday's concert while the wounded were being treated at six hospitals across Manchester.

"Everyone pls share this, my little sister Emma was at the Ari concert tonight in #Manchester and she isn't answering her phone, pls help me," said one message posted alongside a picture of a blonde girl with flowers in her hair.

Paula Robinson, 48, from West Dalton about 40 miles east of Manchester, said she was at the train station next to the arena with her husband when she felt the explosion and saw dozens of teenage girls screaming and running away from arena.

"We ran out," Robinson told Reuters. "It was literally seconds after the explosion. I got the teens to run with me."

Robinson took dozens of teenage girls to the nearby Holiday Inn Express hotel and tweeted out her phone number to worried parents, telling them to meet her there. She said her phone had not stopped ringing since her tweet.

"Parents were frantic running about trying to get to their children," she said. "There were lots of lots children at Holiday Inn."

Making her first comment five hours after the explosion at the end of her performance, Grande said on Twitter: "broken. from the bottom of my heart, i am so so sorry. i don't have words."

Representatives for Grande have said that the 23-year-old pop star was physically "okay" following the blast.

The tour began in Phoenix, Arizona, in February. After Manchester, Grande was to perform at venues in Europe, including Belgium, Poland, Germany, Switzerland and France, with concerts in Latin America and Asia to follow.