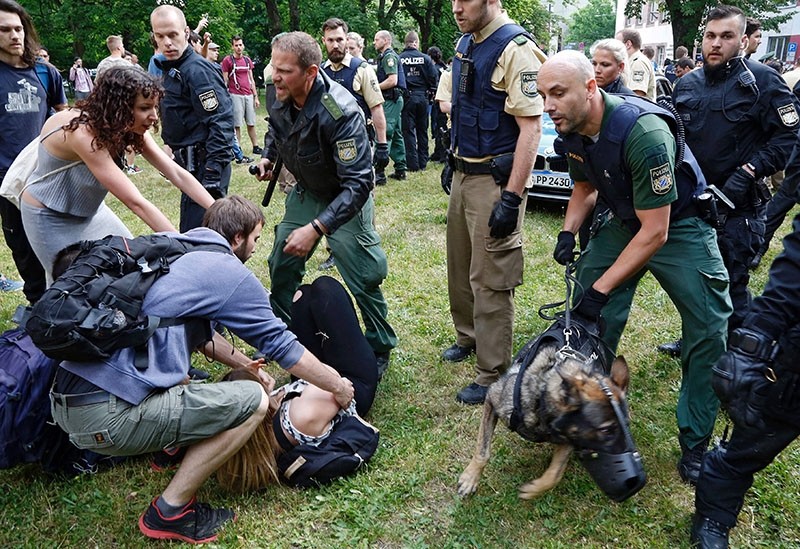 Police use dogs to clear a sit-in protest of vocational school students against the deportation of a 20-year-old Afghan fellow student in Nuremberg, southern Germany on May 31, 2017. (AFP Photo)
by Compiled from Wire Services Jun 01, 2017 12:00 am

Amid the German government's controversial immigration policy, some 200 students staged a sit-in blockade and clashed with police who came to detain for deportation a 20-year-old Afghan student who had been in the country for over four years

Several hundred students joined by locals passing by their campus clashed with police in Nuremberg on Wednesday as one of their Afghan classmates was picked up from the classroom for deportation amid the German government's controversial policy.

The clashes, which occurred after the 20-year-old Afghan was taken by police from the classroom at a vocational school to bring him to a deportation center, left nine police officers injured, according to Deutsche Welle.

The police also used pepper spray and dogs against the protesters who threw bottles and even bicycles. Five people were taken into custody.

Seeing the protest taking place near Nuremberg's Berliner Platz and hearing about it on social media, some locals also joined the protesters, who later resumed their demonstration near the Foreigners Office where police brought the Afghan student. His future will be determined by a judge on Thursday.

Russia Today reported that he had lived in Germany for four years. Students and teachers from the school described him to the media as a well-integrated and hard-working student.

A government decision, which has led to some controversy, placed parts of Afghanistan among safe countries of origin, allowing the deportation of thousands of Afghan migrants. So far, five flights have repatriated some 106 migrants.

The protests took place the same day a car bomb in the Afghan capital Kabul left 90 people dead and hundreds others injured in one of the city's most secure areas. The German Embassy was among the buildings damaged in the blast, along with numerous other foreign representations and Afghan ministries.

Following the bombing, Germany suspended the deportation flights of rejected asylum seekers. Germany, Europe's most populous country, has taken in over 1 million asylum seekers since 2015, at the peak of the mass influx of mostly Middle Eastern refugees and migrants to the continent.

While it has generally granted safe haven to people from war-torn Syria, Germany is increasingly sending back Afghans, arguing that much of their country, where the German military has helped stabilization efforts for years, is safe.

Between December and March, Germany deported 92 Afghan nationals on several charter flights to Kabul accompanied by over 300 police, according to government figures provided to parliament. The deportation policy for war-torn Afghanistan has been controversial. The issue has also prompted reactions from the government's coalition partner Social Democratic Party (SPD), the Greens and the Left.