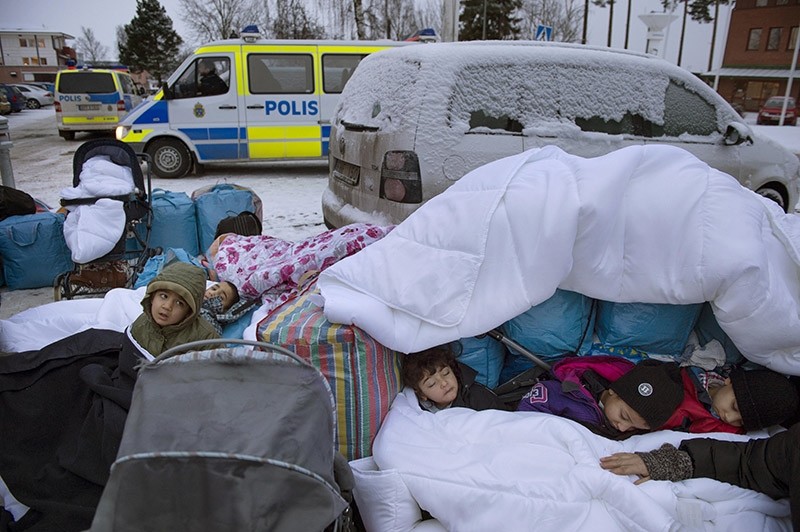 In this Jan. 8, 2016 file photo, migrant children Nor, Saleh and Hajaj Fatema from Syria sleep outside the Swedish Migration Board, in Marsta, Sweden. (AP Photo)
by Compiled from Wire Services Jun 09, 2017 12:00 am

Three men with ties to the Swedish white supremacist movement have been charged with attempted murder and endangering the public in connection with bomb attacks in western Sweden, prosecutors said on Friday.

The three men are suspected of being involved in two bomb attacks - against a left-wing bookstore and an asylum center - and one attempted bombing. The attacks took place in November last year and January this year and left one man seriously wounded.

"We argue that the actions are politically motivated and that the targets for the attacks are the type of targets that the Swedish white supremacist movement has an interest in attacking."

Ljungqvist said the men seemed to be "dissatisfied with the leadership" of the white-supremacist Nordic Resistance Movement for not using violent means to achieve their ends. Two of the men, whom he didn't name, had received military training in Russia before the attacks.

According to Ljungqvist, the acts were not linked to the Nordic Resistance Movement, hinting the men acted on their own.

The Swedish security service SAPO has been part of the investigation that led to the arrests of the men in March.

Their three-day trial is scheduled to start June 21.